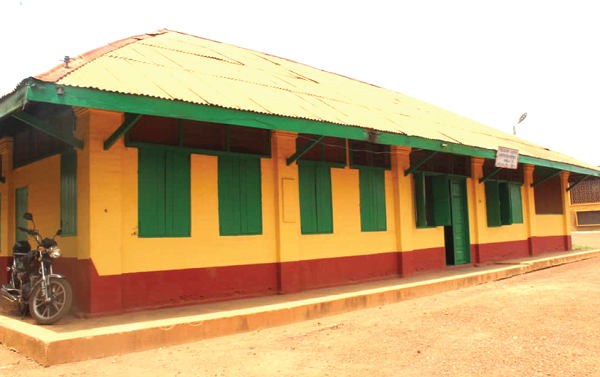 This building, located on the premises of the Sunyani Central Prison, was used as the Regional Administration Office when the erstwhile Brong Ahafo Region was created in 1959
30.5k Shares

The Bono Regional Coordinating Council (RCC), is currently housed in a storey building which also hosts the regional minister, as well as the various decentralised departments.

Until the Bono East and Ahafo regions were created in 2018, the entire area was administered from the RCC's edifices.

However, when the erstwhile Brong Ahafo Region was created in 1959, officials who nurtured the young region did not have the privilege to sit in such edifices to administer affairs.

The first Regional Commissioner, Mr Boahene Afari-Yeboah and his core staff had to share a small building currently located at the Sunyani Central Prisons premises to conduct business.

The building is currently being used as the Bono Regional office of the Public Records and Archives Administration Department (PRAAD).

A visit to the office showed that officials of the PRAAD are facing challenges in coping with the limited space in the building.

The Bono Regional Director of the PRAAD, Ms Agartha Aning said her outfit could no longer collect public records for safekeeping for posterity because of lack of space.

“We do not have any space at our repository, there is a poor lighting system, while there are no air conditioners to ensure the safety of the records that we are keeping “, Miss Aning stated.

While there is no space to host visitors, there were also cracks in some parts of the building despite the recent paintings.

“We are privileged to be working in the building used by the first regional commissioner of the erstwhile Brong Ahafo Region”, Ms Aning stated when this reporter informed her about this historical fact.

She told this reporter that she was also aware that the building was also used as a courtroom during the colonial days, adding that “that is why it was sited near the prison to avoid the transportation of convicts to far away prison facilities.

Ms Aning called for the proper rehabilitation of such a historical monument for future generations to know where the region started from.

The first among other persons who have administered the area to date is Mr Yeboah-Afari, whose portrait, captioned "Mr B Yeboah-Afari, CPP: 1/07/58-31/05/59”, is displayed at the conference hall of the RCC, due to his pioneering role.

Mr Yeboah-Afari (November 13, 1920-May 22,1996) was an educator and politician who served in various ministerial portfolios during the First Republic, including being the first erstwhile Brong Ahafo Regional Commissioner and first Ghana’s Minister for Agriculture.

He was a son of Nana Yeboah-Afari,a royal of the Dormaa Stool, who after his secondary education returned to help revived the abandoned Dormaa Secondary School (then the Dormaa State College) founded by one Oppong and Yeboah.

Mr Yeboah-Afari was made a principal of the college by its founders when the first principal resigned upon threats from the British Colonial Government District Commissioner who insisted that the college’s establishment was not part of the government’s development plan.

Mr Yeboah-Afari became politically active when he formed and became the organising secretary of the Dormaa-Ahenkro branch of the United Gold Coast Convention.

Having heard that Dr Kwame Nkrumah had founded the Ghana National College against the will of the colonial government, Mr Yeboah-Afari met him in Kumasi and discussed with him the plight of the Dormaa State College.

He became an active member of the Bono Kyempim Council, a movement which was formed to agitate for a sovereign administrative region for the people of the Bono and Ahafo area, and was in 1951 elected as a member of the Legislative Assembly to represent Sunyani East on the ticket of the Convention People’s Party (CPP).

A write-up on him on Wikipedia indicated that he was later appointed the Minister of Agriculture, Minister for Communication and Works and helped establish the erstwhile Ghana Airways Corporation and the State Transport Corporation.
After becoming a minister without portfolio in 1957 and Ministerial Secretary for Western Ashanti in 1958, Mr Yeboah-Afari was made the first Regional Minister when the erstwhile Brong-Ahafo Region was created in 1959.

In her book, “Conversations with my father”, the eldest daughter of the late Yeboah-Afari, Ms Ajoa Yeboah-Afari, used a Ghana News Agency feature which described her father as a man whose political career “spanned from 1950 to 1962 and laid the foundations for the infrastructure, political/administration, economic and social development of the nascent region.” In other words Yeboah-Afari cut the umbilical cord of the Brong Ahafo Region.

Ms Yeboah-Afari is quoted in the feature as saying her father was an innovator, a committed politician, a principal, an industrialist among other qualities, adding that “he translated his ideals, vision and passion to ensuring the welfare of the populace and the progress of the society into reality for the benefit of Brong Ahafo and Ghana in general”.

“Indeed, Mr Yeboah-Afari lived and realised his vision and mission of achieving the best to advance the cause of the masses. He has left behind footprints in the annals of Brong Ahafo, which unleashed and accelerated the region’s rapid progress and development”.