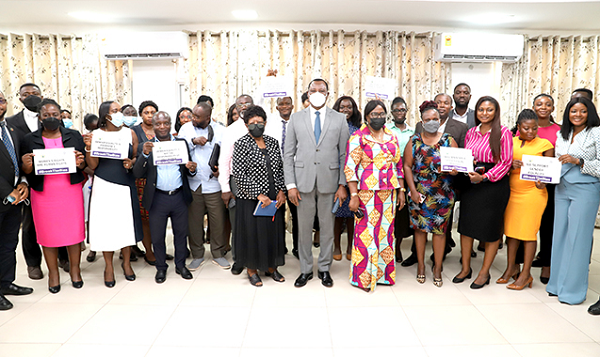 Some participants at the stakeholders meeting on International Womens Day organised by CHRAJ in Accra. Picture: GABRIEL AHIABOR Follow @Graphicgh

The Sustainability Manager of Abantu for Development, Mrs Hamida Harrison, has identified women as worse affected by the effects of climate change in the country.

That, she explained, was because of the gendered services women rendered, such as water and fuel fetching, which had been hard hit by climate change.

“It is women who provide water for the home, they procure fuel for cooking and these are the hardest hit by climate change.

“We have heard of how our women have to walk for miles to look for water and fuel. Climate change presents one of the greatest threats to worldwide efforts to reduce gender inequalities, which are at the core of gendered poverty and vulnerability for women,” she explained.

Mrs Harrison said this at a stakeholder discussion in commemoration of this year’s International Women’s Day organised by the Commission on Human Rights and Administrative of Justice (CHRAJ).

She, therefore, underscored the urgent need for actions that addressed the magnitude of gender inequality.

Mrs Harrison said the way men and women were affected by climate change was different and called for different solutions and responses in addressing the issue.

She said if the issue of gender imbalance was ignored in the climate change problem, then the country was bound to fail in meeting the Sustainable Development Goals (SDGs).

“But if we direct our actions and our policies to mainstreaming gender into climate change activities, there is an opportunity to achieve SDG five on achieving gender equality and empower all women and girls; SDG three on good health and well being; SDG 10 on reducing inequality and SDG 13 on climate action,” she said.

In his address, the Commissioner of CHRAJ, Mr Joseph Whittal, said despite the rights guaranteed to women by the Constitution and Ghana’s human rights obligations, women faced varying challenges and rights violations in the context of climate change including challenges in accessing land, land tenure security, technology and formal financial services to socio-economic factors such as cultural and or customary norms and poverty.

He said there was also an under-representation of women in decision-making on climate change response and adaptation from the local to national level due to prejudiced beliefs and social norms.

On how to address the problems, he, among other things, called for a collaboration between technical experts on climate and gender equality experts to be fostered to ensure effective gender mainstreaming in climate change.

He also called for the work on climate change to be grounded in the human rights framework with a human rights-based approach as the guiding principle for the wellbeing of all women and men.

In his presentation, a Senior Research Fellow of the Centre for Climate Change and Sustainability Studies at the University of Ghana, Dr Bob Manteaw, also highlighted the fact that women suffered the most with regard to the impact of climate change and, therefore, called for another look at how gender issues were discussed.

He called for the accomplishment of women to be brought into the limelight, adding that, to achieve that, more women needed to be given leadership roles.