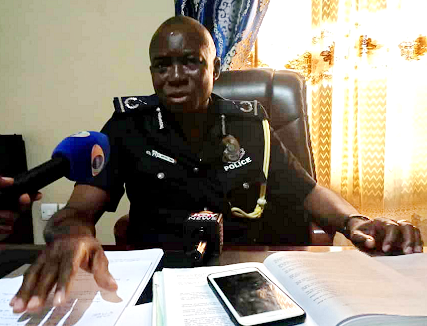 The Central Regional Police Commander, Deputy Commissioner of Police (DCOP) Kwadwo Antwi Tabi, says the service would not shield persons who engage in criminal and unethical acts that bring the service's image into disrepute.

He said once the service got to know about such misconducts, the persons involved would be duly sanctioned.

DCOP Tabi was speaking at his first official engagement with the media after he took office as the Central Regional Police Commander on Friday.

He indicated that the Central Regional police command was greatly worried about some of the conduct of some personnel which had embarrassed the police service in recent times.

Touching specifically on the case of the suspected policeman who released a suspect in exchange for sex, DCOP Tabi observed that though the supposed behaviour was a dent on the service’s image, the police were swift in taking action and arresting the suspect.

In the same way he said the command would work without fear or favour in the discharge of its duties.

He said people who came to ask for favours must understand that the police were a professional institution and it would only be successful if they worked professionally.

He stated that the command would work to make the region uncomfortable for criminals.

“We will conduct a lot of swoops at crime bases and get the criminals out," he stated.

DCOP Tabi said the command together with the National Road Safety Authority and other relevant agencies had put in place measures to help make the roads in the region safer.

He said the Motor Traffic and Transport Department(MTTD) of the service would be deployed on the major roads in the region to help reduce road crashes.

He further charged officers not to be armchair officers but to move out to ensure effective monitoring of policemen under them.

DCOP Tabi called on the public and the media to support the command with credible information to help fight crime.