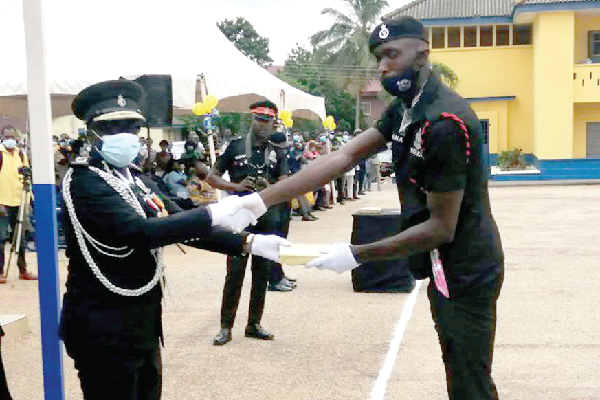 The Ashanti Regional Police Commander, Commissioner of Police (COP) Mr Kwasi Mensah Duku, has said the police will not entertain any form of interference in their quest to ensure peaceful elections in December.

He said the police were battle ready for the task ahead, and warned that anyone who tried to interfere in their work would have himself to blame.

Speaking at the passing out ceremony of 168 general recruits at the Police Training School in Kumasi in the Ashanti Region yesterday, the commander said their objective was to ensure a peaceful environment where the electorate would feel safe to cast their ballot.

Consequently, he said the police had made enough preparations to achieve that objective.

The recruits who underwent six months of training were made up of 69 males and 99 females.

COP Duku said as the election drew near, some miscreants might attempt to take advantage of the situation to foment trouble, using their political affiliations as a cover-up.

According to him, the police would not shield anyone, neither would they be lenient to any suspect based on his or her political affiliation.

The commander, therefore, urged the leadership of political parties to advise their supporters against lawless acts and behaviours that had the tendency to cause trouble in the electioneering process.

He further said any political party that would allow anyone or group of its supporters to misbehave in the party’s name would have itself to blame.

COP Duku said with the support of other security agencies such as the military, the police would be up to the task of ensuring a free and fair election.