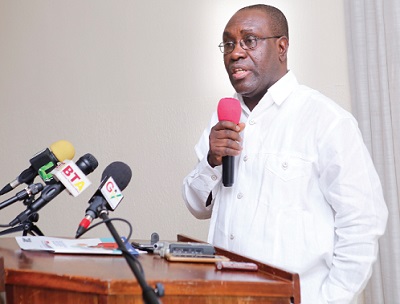 Organised labour has thrown its weight behind the government’s compulsory vaccination policy.

It said the policy was necessary to secure the populace and the country against the coronavirus disease (COVID-19) pandemic and its effects on socioeconomic development.

The Secretary General of the Trades Union Congress (TUC), Dr Anthony Yaw Baah, told the Daily Graphic yesterday that the union would rally its members to avail themselves for the vaccination to help reduce the risk of infection and spread of the virus.

Dr Baah, reacting to the announcement of the compulsory policy, which takes effect from January next year, however, called for deeper engagement between the government and labour to fashion out the modalities on how to make the exercise a success.

In an interview with the Daily Graphic, the TUC Secretary General described the COVID-19 vaccines as the first credible line of defence against the virus, which has mutated in various forms, posing increasing risks to lives and economic activities.

“We are talking about economic recovery and if we want the economy to recover properly, we have to be vaccinated. Being vaccinated boosts confidence and that helps with business recovery. And so, for us, we support the policy, but the vaccines should be made available to workers,” he said.

In November, the government declared December as the vaccination month as part of efforts to create awareness for more people to be jabbed against the virus.

The Director-General of the GHS, Dr Patrick Kuma-Aboagye, had said at a news conference last month that after December, the vaccination would be mandatory for employees in all arms of government, health workers, security personnel, staff and students of secondary and tertiary schools, as well as commercial drivers.

While calling for increased public acceptance, Dr Kuma-Aboagye said public response to the vaccination had been slow, with only 1.4 million people being jabbed.

“Pockets of vaccine hesitancy pose a risk to the gains made so far. The current low numbers recorded in the country may not be maintained if vaccine uptake is not increased significantly,” he said.

More than 1,200 people have died from the virus, which had infected more than 131,000 people as of December 12 and pushed the economy into its first recession in 37 years.

He said that gave an assurance that issues of shortage would not arise in the event that the public finally welcomed the mass vaccination exercise and encouraged all those who were yet to avail themselves for the jab to do so, saying that “in addition to securing lives, a successful vaccination programme will boost efforts to salvage the economy from the reins of the COVID-19 pandemic”.

Dr Baah, however, advised the government and the GHS to engage the TUC to utilise its network and rapport with workers to make the exercise smoother.

He said although the TUC had not been engaged, the union had asked all its members and their families to be vaccinated, given the importance it attached to the exercise.

He also advised the GHS to make COVID-19 vaccines available at workplaces for easy and convenient vaccination of workers against the virus.

That, he said, would help make the government’s compulsory vaccination policy a success.

Dr Baah said it would also increase access to the vaccines for the government to realise its target of jabbing 20 million Ghanaian adults by the end of the year.

He intimated that his interaction with workers across the country had indicated that while they were in support of the mass and compulsory vaccination exercise, access to the jabs remained a challenge.

Consequently, he said, the government would give the policy a booster if it doubled workplaces into vaccination centres for the purpose of reaching workers easily.

“For instance, if you say workers of the Graphic Communications Group Limited (GCGL) cannot access the place if they are not vaccinated, but there is a centre right at the GCGL, the workers will just get vaccinated there and then.

“But if they have to move to the Greater Accra Regional Hospital (Ridge Hospital) to get vaccinated, then obviously it is an inconvenience and it may hinder the exercise,” he said.

In February this year, Ghana became the first country in sub-Saharan Africa (SSA) to receive a consignment of vaccines under the COVAX scheme.

The 350,000 doses of AstraZeneca/Oxford vaccines opened the door for various consignments to arrive.

As of November, the GHS said the country had received more than 12 million doses and was due to take delivery of around seven million more by the end of December.