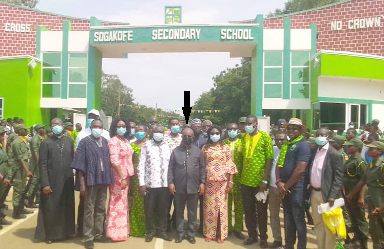 The Sogakope Senior High School(SOGASCO), in the Volta Region has launched its Diamond anniversary with a focus on improving the school's infrastructure.

With a vision to produce disciplined, principled and morally upright students with high academic standards, the school, established in 1961, has made strides in academic excellence and sports, and impressive efforts towards the continued production of highly disciplined students.

Facilities at the school, however, leave a lot deal to be desired. The administration block is currently in a deplorable state in spite of a recent re-roofing, while the boys’ dormitories remain in a poor state.

In the lead-up to its anniversary to be celebrated some time next year, plans have, however, been drawn to construct a 5,000-seater assembly hall for the school and an 18-unit classroom block and dormitories for the students.

The initiative, according to the Headmaster of the school, Mr. Newman Dziedzoave, was a major pledge by the Volta Regional Minister, Dr. Archibald Yao Letsa, who had indicated that the projects would be brought into fruition in a collaborative effort between his outfit and the Ministry of Education.

Mr. Dziedzoave said various stakeholders of the school, including the Sogakope Old Students Association (SOSA), had so far contributed immensely to the institution's development.

The headmaster made the statement during the Homecoming of the old students, and the inauguration of the newly constructed school gate.

The new gate, valued at GH¢177,000, was erected by the old students to beef up security in the school which was hitherto an open space for disruptive activities from people in the surrounding communities.

Mr. Dziedzoave described the gesture as impressive and further indicated the need for alternative routes for people within the community to keep them away from the premises of the school.

The headmaster listed numerous challenges currently confronting the institution to include the unavailability of a functioning vehicle for daily operations.

"The situation, he indicated, also took a heavy toll on its kitchen staff who have had to convey foodstuffs from the market on motorcycles.

Mr. Dziedzoave, therefore, appealed to the government and other benevolent organisations to provide the school with pick-up vehicles and a tricycle for its kitchen staff.

Among the institution's other infrastructural needs are the school's science laboratory which serves other schools in the South Tongu District but which is poorly resourced.He thus called for an urgent intervention to address the challenge.

Speaking on the theme for the occasion, “Achieving Academic and Social Excellence, the role of Old Students”, Mr. Dziedzoave lauded the magnificent contributions of SOSA to the school.

The National President of SOSA, Mr. Maxwell Lukutor, in an address, said the association would increase its support to tackle infrastructural challenges of the school. He said the association's next big project was to construct new dormitories and washrooms, especially for the female students.

The Volta Regional Minister, Dr. Letsa, who inaugurated the new school gate, raised concerns about disruptive activities from immediate communities outside the perimeters of the school which distracted students during studies.