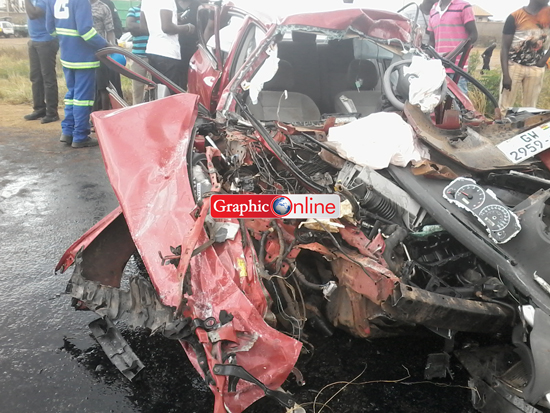 Five persons have been reported dead, with several others sustaining various degrees of injury early hours of Tuesday when a Ford Transit vehicle and a Hyundai universe space bus collided at Tefle-Glamanuonyikpo near Sogakope in the Volta region.

Four occupants of the Ford Transit; two females and two males, including the driver’s mate, died on the spot, while another male occupant was also pronounced dead upon arrival at the hospital.

According to eyewitnesses, a wrongful overtaking by the Ford Transit vehicle which was travelling from Sogakope towards Accra led to the crash.

They said the Ford Transit in an attempt to veer off the road upon sensing danger, collided sideways with the Hyundai Universe Space Bus which was travelling from Kumasi to Aflao.

Apart from a woman who was identified as a seamstress from Sogakope, all other four dead victims are yet to be identified but are believed to be travelling from Aflao or Keta to Accra.