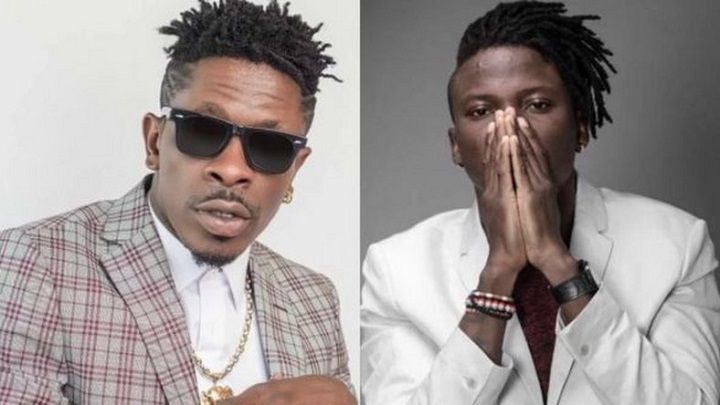 As of press time Sunday, the police said they had taken statements from the two artistes and that they would be detained.
Shatta Wale and Stonebwoy were at the Accra Regional Police Command with their managers.

The Head of the Operations Unit of the Accra Regional Police Command, Assistant Commissioner of Police (ACP) Mr Kwesi Ofori, who was at the VGMA, told the Daily Graphic that the police “will look into the confusion and other public disorder issues”.

Also invited to assist the police in their investigations were officials of Charter House, the organisers of the event.

There was an altercation between some members of the Shatta Movement (SM), the fan group aligned to Shatta Wale, and Stonebwoy’s fans, who are known as the BHIM

Natives, in the auditorium of the Accra International Conference Centre during the 20th edition of the VGMA.

The rowdy scenes happened after Stonebwoy had been called on stage to receive the award for Reggae/Dancehall Artiste of the Year.

Although it is not clear what triggered the fracas, patrons at the event and some people who watched the show live on television alleged that they saw Shatta Wale walk towards the stage with some of his fans, while Stonebwoy was also seen pulling a gun before walking off stage.

Stonebwoy’s brandishing of a weapon led many people to ask if it was legal to display a gun in such a situation and if the weapon was licensed.

Some security experts who spoke to the Daily Graphic on condition of anonymity said the police would have to look into the act of brandishing a weapon in such a public place, since the act was likely to threaten patrons at the event and cause fear and panic.

They referred to Section 7 of the Arms and Ammunition Act 1972, which focuses on control of public display of arms or ammunition.

The law states: “No person shall, except in accordance with the terms of a permit granted under this decree or with the written consent of the Inspector-General of Police, publicly display any arms or ammunition (including explosives) or discharge any firearm or other weapon in any public place.”

In the course of the disturbances, the police arrested a youngman who allegedly used pepper spray in the auditorium which was said to have harmed some patrons at the event.

The incident brought the flagship awards for Ghanaian artistes — the VGMA — into disrepute.

Shatta Wale and Stonebwoy are two of the country’s biggest crowd pullers in the music industry, but there have been reports of friction between them. Their fans have also been trading accusations and verbal salvos on social media.

For about 30 minutes yesterday, the well-attended event was truncated, as security personnel tried to restore calm.

Later, when it resumed, Stonebwoy, who was called to receive another award, apologised for the near fisticuffs.

Speaking on stage after he had received his second award for the night, he said he was sorry for what happened, explaining that he had reacted out of natural instinct.

“I’m sorry for the incident that happened earlier. I only had to react out of natural instinct because we all know how premeditative some people can be. We have seen on social media the threats and everything and so we couldn’t come in unprepared because anything could have happened, like you guys saw.

Both artistes took to social media to state their positions on the matter and throw verbal jabs at each other.

Shatta Wale wrote on Facebook: “My crew had good intentions moving up there for us to prove that unity to make this 20 years celebration a wonderful one, but hey, as usual,Shatta Wale dierr Ibe dis, Ibe dat, so what happened just happened and the sensible ones saw how insecure music has made some people just to pull out guns.”

In a series of tweets, Shatta Wale descended heavily on his “opponent’ in the music industry. He described Stonebwoy as the aggressor in the whole drama, pointing out that it was criminal for Stonebwoy to pull a gun in a public place.

“You pull a gun on innocent people. Ghana Police, do your work!! This is called insecurity,” he posted on his Twitter handle.

In another tweet, he said: “Your assertion that you were threatened could potentially be used as defence against the aforementioned charges, but the finding that you were in fear for your life will be a point of fact for the jury to decide.”

Stonebwoy also took to Twitter to thank the police for doing a good job on the night but denied reports that the police had arrested him that night.

“Kindly help me thank the Ghana Police Force for keeping situations calmer and at all cost ensured my safety up until I entered my gates. I was never arrested whatsoever, as some media reporters have it. Thanks to the Counter Terrorism Commander and his team,” he tweeted.

In all the developments, the police were not happy with the internal security arrangements for the event.

ACP Ofori urged the organisers of events to invest in the security and safety of their patrons.

“Security has to be a chief factor when organising such events,” he said, and added that the Accra Regional Command would not allow event organisers to “do their own thing when it comes to security and just request for police presence at the scene”.

He said internal and external security arrangements must be key to ensure the desired security had been provided for such events.

Organisers, he said, would be required to provide some critical information for the police, such as the number of people expected at the event, the kind of high-profile personalities expected, seating arrangements, especially where rival groups were involved, among others.

“During such events, the police must be notified to ensure that policemen are deployed close to the sitting positions of competitors or adversaries in an award category to prevent clashes,” he said.

To avert future occurrences, the Accra Regional Police Operations Commander said “in future the police will take control of security arrangements for such events. We will conduct body searches on all patrons. We will call for more saturated security during events like this one”.

He said the police were at the VGMA in their numbers and that was why “we were able to contain the fight in the hall, without it degenerating to affect the people outside the auditorium to result in the damage of vehicles which were parked outside”.

“We even had to increase our strength by calling for reinforcement. Our timely intervention prevented a stampede. There were police patrol teams on major highways to ensure people arrived home safely,” he added.