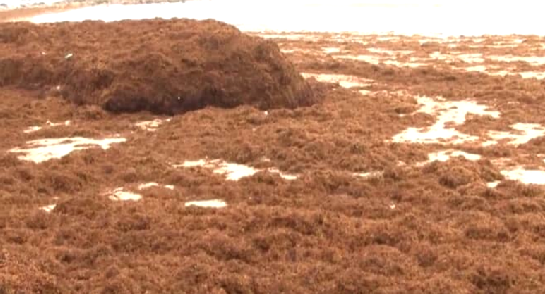 The sargassum seaweed is now a common sight on the beaches of the Western Region
30.5k Shares

Fishing communities and beachfront hospitality operators in the Western Region have appealed to the government and the Environmental Protection Agency (EPA) to help to contain the pollution of the beaches by highly toxic sargassum.

The perennial pollution of the coast by the seaweed has become serious this year, with residents, revellers and fisherfolk barely able to carry out any activity on the shores.

The EPA officials in the region have described the situation as very serious, explaining that the quantity of weed being washed ashore is beyond the capacity of any of the municipal, metropolitan or district assemblies to handle.

They said the situation required a national support to manage since the sargassum contained substances that could cause sore throat and irritate the lungs.

The sargassum is believed to have originated from the North Atlantic and the Caribbean waters and carried to the west coast of Africa by winds and high tidal waves.

The Western Regional Director of the EPA, Mr. George Diawuoh, said the situation had come to the attention of the EPA and other agencies, and indicated that the assemblies would not be able to manage the situation alone.


“We need the support of the National Disaster Management Organisation (NADMO) at the national level and other relevant stakeholders to manage it since more may wash ashore,” he said.

Checks by the Daily Graphic indicated that in the Western Region, the weed had spread from New Town in the Jomoro Municipality through to Ellembelle, Nzema East, Ahanta West, Sekondi/Takoradi and Shama, and had stretched further to the Central and Greater Accra regions and Aflao in the Volta Region.

Indeed, some of the coastal communities, including Axim and Miemia, Adjua, Sekondi/Takoradi and Shama, have their shorelines overgrown with the seaweed.

Some fishermen lamented that the situation was causing them serious social and financial problems and called on the government to intervene to protect their business.

The Chief Fisherman of Lower Axim, Nana Kofi Bentil, told the Daily Graphic that the situation was devastating to their business, stressing that the volume of sargassum washing ashore this year was huge.

“We do not even have a berthing place for our canoes; the entire shallow area where we anchor our canoes has been completely covered by the weeds,” he said.

Another fisherman, Nana Adu, said they were unable to go to sea with outboard motors.

On the flip side, the sargassum weed acts as a mobile transport habitat for a great variety of marine life and as refuge for young fishes that may lack mobility.

When young fishes find a safe haven in the sargassum weed, they are carried far in a more protected habitat from the ocean’s predators, making it possible for them to survive.

Many species of marine life take refuge in the sargassum weed and travel thousands of miles on this floating habitat, seeking protection and survival on the course.

Once the sargassum weed finds its way to a shoreline, it can be culled and used as nutrient-rich fertiliser.