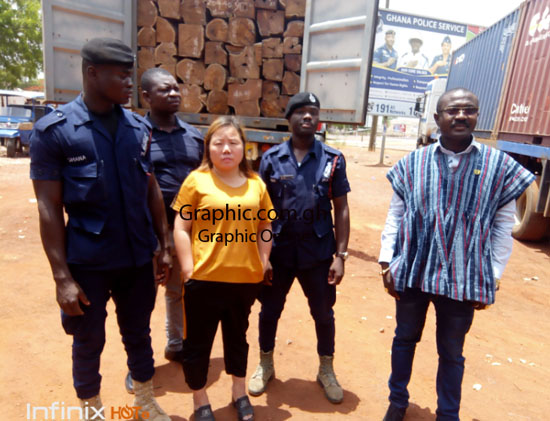 Helena Huang, the Chinese national who jumped bail after she was arrested for illegally transporting a large quantity of Rosewood to Tema for export to China, has been rearrested.

Ms Huang and the person who stood surety for her, Mohammed Bondirigbun, Tuesday appeared before the circuit court presided over by Justice Twumasi Appiah

She was since been referred to the Immigration Service to look into the documents of the Helen Huang for further investigation, while Bondirigbun has been acquitted.

She was arrested in May at the Vittin police checkpoint on the Tamale-Yendi highway escorting the two trucks loads of Rosewood, with registration numbers BA 2225 C and GR9720-12, from the Yendi direction through the Tamale metropolis enroute to Tema.

She was rearrested after she reported herself to the police six weeks after she jumped bail.

“Listening to her, and listening to all that she has told me, I think the best option left to me is to send her to Accra for further investigations,” he said.