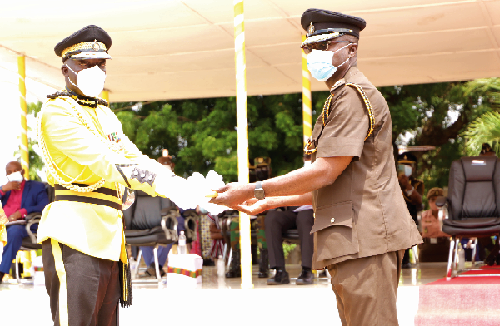 The outgoing Director General of Prisons, Mr Patrick Darko Missah, has appealed to the government and other stakeholders to support the Ghana Prisons Service with adequate resources and logistics to enable it to discharge its mandate effectively.

He specifically mentioned the provision of vehicles as a major requirement for the service as it seeks to diversify and strengthen its operations and contribute effectively towards public safety.

"I wish to appeal to the government and other stakeholders to provide more resources and logistics, especially, vehicles to enable the Ghana Prisons Service to contribute effectively towards public safety and the rehabilitation and reformation of offenders,” Mr Missah said yesterday at a farewell and pull-out ceremony for him at the Prison Officers Training School in Accra.

Mr Missah has bowed out after 32 years of successful service to the Ghana Prisons Service and the country.

He was enlisted into the service on September 30, 1988 and later commissioned as an Assistant Superintendent of Prisons (ASP) on April 1,1989.

Mr Missah was appointed the Head of the Prisons Service on March 27, 2017 by President Nana Addo Dankwa Akufo-Addo.

Prior to his appointment as the DG, Mr Missah had served as the Deputy Director General of Prisons in charge of Operations.

It was a moment of celebration and fulfilment for him as many people, including senior prison officers (serving and retired), representatives of various security agencies, government officials as well as family, friends and well-wishers gathered at the parade grounds to bid him farewell.

Dressed in a full prisons ceremonial uniform, Mr Missah arrived at the parade grounds looking joyful as he received cheers from a section of the officers present, who repeatedly chanted
"Wofa nie," to wit, "Here comes uncle."

The celebrant later inspected a parade in his honour, after which he was showered with gifts from individuals and institutions in recognition of his "outstanding contribution" to the progress of the service.

The Minister for the Interior, Mr Ambrose Dery, who graced the occasion, presented the “Plaque of Honour" to Mr Missah.

Mr Missah handed over the “key of authority” to the Ag. Director General of the Prisons Service, Mr Isaac Kofi Egyir, signifying a successful transfer of authority.

The event was climaxed with a pull-out ceremony for the retiree. The ceremony is a symbolic event to signify the retirement of an officer, usually of higher ranking.

Mr Missah urged the prison officers to exercise a high level of discipline at all times to advance the performance of the service.

He also urged them to support and be loyal to the new Director General to ensure that his tenure was successful.