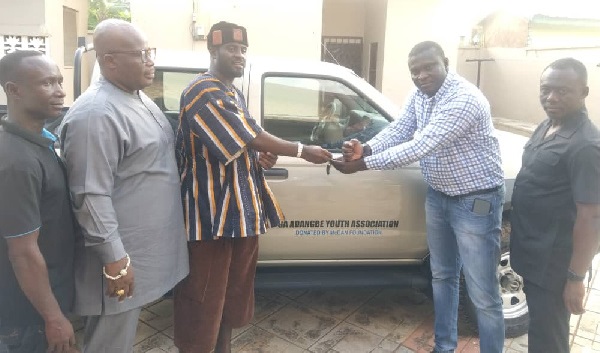 Mr Yaw Sarpong Boateng, the Executive Secretary of the Right to Information Commission, speaking at the forum. Picture: EMMANUEL BAAH

Under the Right to Information (RTI) Law, no office holder can deny a requester the right to information unless it involves information on the President or the Vice-President, the Cabinet, law enforcement and public safety, international relations, the economy or any other such national interest.

"The RTI Law covers every public institution. The law gives people the right to access all sorts of information, apart from exempt information,” the Executive Secretary of the Right to Information Commission (RTIC), Mr Yaw Sarpong Boateng, has said.

Speaking at a forum in Sefwi-Wiawso, the Western North Regional capital, yesterday, Mr Sarpong mentioned the other exempt information to include internal workings of public institutions, privileged and personal information.

Present were the Sefwi-Wiawso Municipal Chief Executive, Mr Luis Owusu Agyapong; the Western North Regional Police Commander, Mr Ernest Akrasi Mensah; the Chairman of the RTIC Board, Justice A.K. Ofori Atta (retd), some members of the board and members of the public.

Mr Boateng said the RTIC would extend access to information to include some private institutions in the country.

“A draft legislative instrument (LI) is currently being worked on to be laid before Parliament to that effect which will allow some level of private institutions to be incorporated in the LI to allow people to access information from those institutions,” he said.

He, however, did not give timelines on when the LI would be ready, saying it was work in progress, and that private institutions which would fall within the ambit of the RTI Law would include those that performed public functions or engaged public institutions to perform functions.

The RTI Act was passed in 2019 to operationalise Article 21 (1) (f) of the 1992 Constitution, which stipulates that “all persons shall have the right to information, subject to such qualifications and laws as are necessary in a democratic society”.

Per the RTI Law, the RTIC has the mandate to promote, monitor, protect and enforce the right to information granted the people under Article 21 (1) (f) of the 1992 Constitution.

People denied access to information or who are dissatisfied with the process to access information can file complaints with the commission, and it has the power to make a determination on such complaints.

The law further states that any party aggrieved by the decision of the commission has the right to file an application at the High Court for redress.