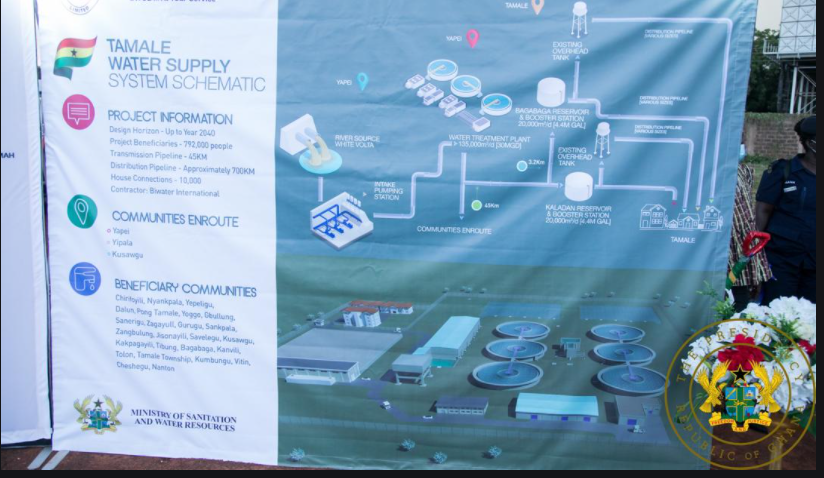 Following the successful completion of the design stage of the Tamale-Damongo and Yendi Water Supply systems, works on the projects are expected to start by the second quarter of this year.

This was disclosed by the Northern Regional Public Relations Officer (PRO) of the GWCL, Nii Abbey, in an interview with the Daily Graphic at a stakeholders forum in Tamale last Thursday in commemoration of this year's World Water Day.

The works are expected to be completed in four years from now, and will address the perennial water shortages in Tamale, Damongo and Yendi and their neighbouring communities.

The President, Nana Addo Dankwa Akufo-Addo, cut the sod for the Tamale Water Supply Project on July 28 last year. The project is estimated a cost of $223 million. That for Damongo is estimated at $49 million, while that of Yendi would cost about $30 million.

The stakeholders forum was on the theme: "Finding lasting solution to the water supply challenges in Tamale" and was organised by Catholic Relief Services (CRS), a non-governmental organisation (NGO) in collaboration with the GWCL.

In his address, the Northern Regional Production Manager of the GWCL, Mr Nicholas Okyere, said if sand winning and agricultural activities in the White Volta basin were not minimised, and the 200 metres buffer zone from the river was not respected, water supply to Tamale and its environs would be affected even if the new water supply system for the area came on board.

He said it costs GWCL an average of GH¢10 million a year to treat water for consumption for Tamale and its environs because the water intake area of the river at Nawuni was heavily polluted.

The Programme Manager for Water, Sanitation and Hygiene (WASH) programme at CRS, Mr Emmanuel Kogo, said to mitigate water security challenges, especially in Northern Ghana, the CRS was supporting the government to deliver on its mandate of improving access to safe drinking water in communities and institutions.

Due to excessive sand winning and agricultural activities, the White Volta, which is the source of potable water for Tamale and its environs, is under threat of siltation. Meanwhile, the River Dakar which provides Yendi with its water supply has dried up as a result of agricultural activities along the river bed.

Mr Kogo said the CRS was partnering the Tamale Metropolitan and Sagnarigu Municipal Assemblies and the GWCL to implement the Urban WASH and Resilience project, as part of measures to solve the perennial water shortages that hit Tamale and neighbouring communities.

The Northern Region Economic Planning Officer, Alhaji Inusah Abubakar, who represented the Northern Regional Minister, said the government was committed to addressing the challenges of water in the region as demonstrated by the sod-cutting event for the Tamale and Yendi water supply projects last year.

The Coordinating Director for the Tamale Metropolitan Assembly (TaMA), Mr Gilbert Nuuri-Teg, commended CRS for its WASH interventions in the Tamale metropolis and added his voice to calls for water bodies which were sources of drinking water to be protected.

A representative of the Water Resources Commission (WRC), Mr Aaron Bundi Aduna, called on metropolitan, municipal and district assemblies (MMDAs) in the region to collaborate and form an integrated water management body.
He also called on government agencies, traditional authorities and community leaders to join forces to protect water bodies for water security in the region.

Meanwhile, the Overlord of Dagbon, Ya-Na Abukari II, has made a passionate appeal to the Yendi Municipal Assembly and philanthropists to lend their support towards finding a solution to the acute water shortages that hit Tamale, Damongo, Yendi and their environs.