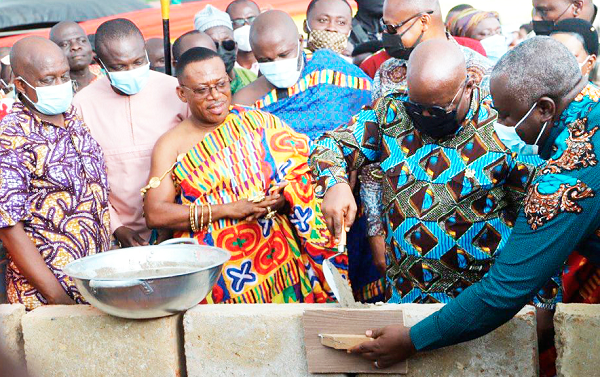 President Akufo-Addo laying the foundation block for the start of the project at Bidiem, while Oguashia Oduropanin Birikorang (in Kente), the Edubiasemanhene; Mr Simon Osei Mensah (left), the Ashanti Regional Minister, and others look on. Picture: EMMANUEL BAAH
30.5k Shares

President Nana Addo Dankwa Akufo-Addo has cut the sod for the construction of a 100-bed District Trauma and Accident Hospital at Bidiem, near Obuasi, in the Ashanti Region.

The facility is one of the major health projects being undertaken in the region to improve access to health care.

The Ashanti Region, according to the National Road Safety Authority (NRSA), records about the highest accident cases in the country with a number of fatalities and injuries annually.

The hospital will be equipped with a laboratory, procedure unit, circulation unit, physiotherapy and consulting/counselling rooms besides the accident and emergency/intensive care units.

There will also be a theatre ward, washrooms, changing rooms, as well as a store and nurse station offices.

It is being constructed by the Universal Hospitals Group (UHG), the contractors.

At a ceremony to symbolise the commencement of work on the project, President Nana Addo Dankwa Akufo-Addo said his administration was committed to seeing to the successful completion of the project.

He cited the government’s commitment to build 111 new hospitals across the country, commonly referred to as Agenda 111, saying the concept was aimed at bringing healthcare services to the doorstep of the people.

He said the investment into the health sector was to address the uneven distribution of healthcare infrastructure.

Projects under the initiative are expected to be completed within 18 months.

The Ashanti Regional Minister, Mr Simon Osei-Mensah, gave the assurance that the Regional Coordinating Council would monitor the projects to ensure value for money in their construction.

The social amenities being provided by the government, he said, were part of efforts to transform the lives of the people for the better.

The Member of Parliament for Obuasi West, Mr Kwaku Kwarteng, advised the people to keep faith with the government since the leadership had worked hard to fulfil most of its election campaign promises.

The Paramount Chief of Edubiase, Oguashia Oduropanin Birikorang, appealed to the government to construct a technical and vocational education and training facility at New Edubiase to augment the skills training of the youth in the area.