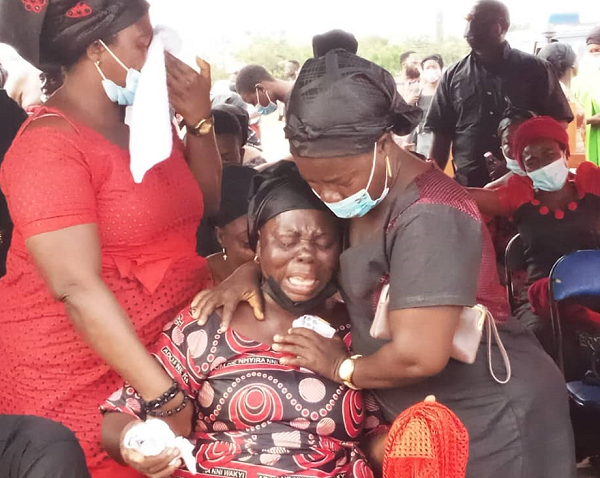 The mother of the slain policeman being consoled

The remains of General Constable Emmanuel Kobby Osei, the policeman who was killed in the bullion van attack in Accra, were last Saturday interred at the Gomoa Nyanyano Cemetery.

This was after a Requiem Mass in his honour at the Nyanyano Kakraba Park in the Gomoa East District in the Central Region.

Osei, a member of the Special Weapons and Tactics (SWAT) Unit of the Ghana Police Service, was killed on June 14, this year by armed men on motorbikes at about 11 a.m. while on escort duties when they attacked bullion van 24, at Adedenkpo, a suburb of James Town in Accra.

Many people, including the Minister for the Interior, Mr Ambrose Dery, and senior police officers from Accra and the Central Region, attended the burial service.

It was a sorrowful and emotional scene, as the parents - Mr Peter Kennedy Atta and Madam Margaret Oforiwaa, as well as other relatives of the slain policeman, wept uncontrollably.

His father, a middle-aged man, wept inconsolably while his mother had to be taken away for a while during the service to be consoled before being brought back to the funeral grounds.

Others who could not control their emotion, expressed it in other forms, with some seen rolling on the ground as they came face to face with the remains of their beloved. 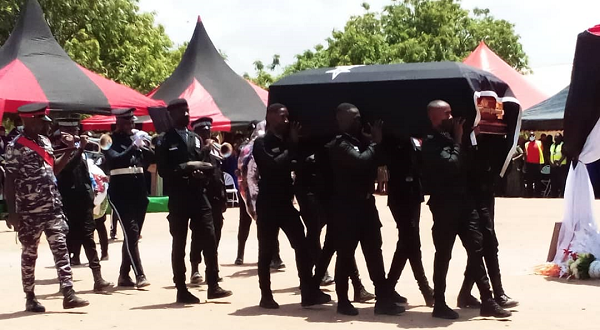 In a message, Mr Dery indicated the government's resolve to provide security personnel with the requisite accoutrements to fight crime and called on the public to assist the police in the fight against crime.

He announced that General Constable Osei died a hero and would forever be remembered as such.

“Emmanuel Osei, he died a patriot. He died a professional, with high standards in the Ghana Police Service. He is a hero, he joins a long list of heroes and heroines who have died in the Police Service and we will continue to remember him,” he said.

The Interior Minister further announced that the deceased had been promoted posthumously to the rank of Lance Corporal with effect from the day he died.

“As a policeman, the late General Lance Corporal Osei was exposed to several challenges in the discharge of his duties.

“The police service and the entire nation grieve over your untimely demise. The pain is unbearable and will be difficult to live with,” Mr Dery said.

In a homily, the Chaplain General of the Ghana Police Service, Very Rev. Fr. George Arthur, encouraged members of the public not to renege in their efforts to assist the police with information to fight crime in society.

According to him, the criminals lived with them and so it was incumbent upon the public to expose them so as to ensure law and order in the society.

On that fateful June 14, the armed robbers in a movie-like style, attacked the van and aimed directly and shot the policeman before taking away the booty, along with the weapon of the latter.

A woman who had witnessed the incident and raised an alarm, was also shot and killed in her shop as she attempted to hide.

The bullion driver sustained injuries and was sent to the Korle Bu hospital for treatment. Two tellers who were in the van escaped unhurt.