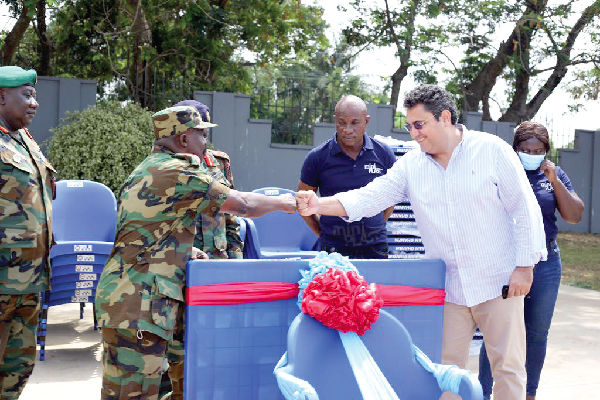 The items, officials of GAF said, would serve multiple purposes, including being used during promotional examination for officers.

The GAF had gone to Miniplast to purchase that quantity of tables and chairs to be used during promotional examinations for officers, but on learning about the purpose of the purchase, the company absolved the cost of GH¢150,000 and issued out the items as a gift to the military.

The Director-General of Training of the GAF, Brig. Gen. Twum Ampofo-Gyekye, said: “Miniplast decided to absolve our cost for the 500 chairs and 500 tables when we told the company about the purpose for securing those logistics. This is a gesture we are grateful for.”

The Deputy Managing Director of Miniplast, Mr Nadim Ghanem Pares, said the donation should strengthen the friendship between Miniplast and the GAF.

“The GAF must be commended for their professional conduct in various aspects of their work, both in Ghana and in some parts of Africa. Miniplast appreciates their selfless work and will help in sponsoring their activities,” he stated.

He added that the donation was in recognition of the good works and selfless sacrifices of the military.

The Chief of Staff of the GAF, Major General Peter Nicholas Andoh, received the items on behalf of the Chief of the Defence Staff and expressed appreciation to Miniplast for the gesture.

“We are grateful to Miniplast. This gesture is one that we are proud of and worthy of emulation by other institutions and organisations. We are ready to receive any warm gesture that will aid in the smooth operation of the GAF,” he stated.

“This donation is the beginning of a friendly relationship we are forming with other institutions, so everyone should come on board to help form this relationship,” he added.

Major General Andoh also urged the public to feel safe and secure, saying the GAF were ready to join hands with the police to ensure the safety of society.

“The public should be assured that the GAF are ready to join the police to safeguard public peace,” he stressed.