Coronavirus: Mad rush for foodstuffs over fear of COVID-19 lockdown 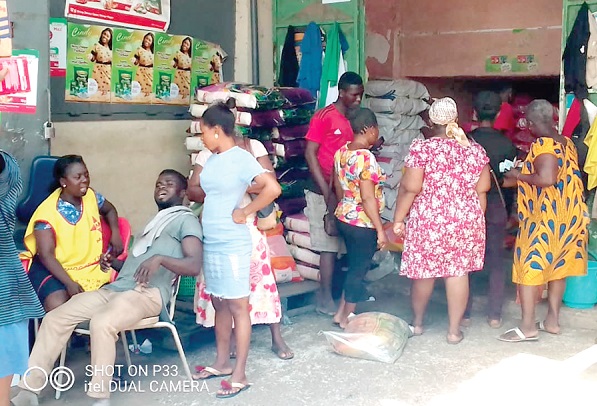 A Gridlock, panic buying, price hikes and total sell-out were the order of the day last Saturday when hundreds of Ghanaians went out to buy foodstuffs and essentials to stock up in anticipation of a lockdown as efforts are enhanced to prevent the spread of the coronavirus disease (COVID-19).

The explosion of people at the markets, especially at Accra Central (Makola), over the weekend was also in response to the announcement last Friday that major markets in the Greater Accra Region would be closed today for a disinfestation exercise as part of efforts to curb the spread of the COVID-19.

The panic buying was also fueled by speculations that the country would be locked down from Monday, in spite of a timely tweet by the Minister of Information, Mr Kojo Oppong Nkrumah, dispelling the rumour about the lockdown and asking the public to stay calm.

The increased number of confirmed cases from 11 to 16 within a day, and later to 21, heightened speculations that President Nana Addo Dankwa Akufo-Addo’s next national broadcast would announce a lockdown.

That, however, turned out to be untrue, with the President only announcing enhanced measures that included he closure of all borders, not a restriction on the movement of people and traffic.

Last Friday, the Ministry of Local Government and Rural Development announced that all the 137 markets in the capital would be closed today for a disinfestation exercise.

The markets are expected to be opened tomorrow.

The exercise will be replicated in the other regions in the coming days.

The announcement of the closure of the markets made thousands of people descend on them to buy food items and other essential goods.

Apart from the traditional markets, many supermarkets across the capital also recorded exponential increases in customers, as people .
rushed to buy essential items for fear of not having access to them in the coming days.

From the Madina Market, Emmanuel Ebo Hawkson reports that there was a mad rush for virtually every food item, with the most sought-after items being vegetables, tubers, rice, frozen meat and gari.

The sheer number of shoppers and their incessant purchases led to most sellers running out of stock, a situation which made other shoppers disappointed.

“I have never seen anything like this in my 15 years of selling tomatoes. It is as if there is war and everybody wants to stock up food in anticipation of an impending danger,” Auntie Mansa, a tomatoes seller, said.

At a supermarket near the Bawaleshie Presbyterian School, East Legon, it was observed that many shoppers were busily buying items in large quantities.

Toiletries, rice, cooking oil, beverages, disinfectants and canned foods were in high demand. People were buying in bulk, and no matter the number of times the shop attendants filled the shelves, there was still the need to meet the demand.

“We have a lot in our warehouse, but at the rate at which people are buying, we may run out of stock of some items, especially toiletries,” a shop attendant, who wanted to remain anonymous, said.

There was heavy congestion at the Dome Market in the Ga East municipality, reports Desmond Tawiah.

Apart from heavy vehicular traffic, there were also many people at the market, in close proximity to one another, a situation which made it impossible for them to adhere to the one metre social distancing directive given by the President to help avoid the spread of the COVID-19.

From Tema, Samuel Tei Adano reports that there was congestion in all the markets in the Industrial City, as residents came out in their numbers to buy food items.

A buyer, Mr Emmanuel Ashong, said he was purchasing items that would last his family for at least the next two weeks.

“I heard there would be a lockdown, so I am buying to save my family from any difficulties. I don’t want to put my family at risk in these difficult times,” he said.

The Daily Graphic also observed that many of the people rushing to buy items thought the markets would be closed down indefinitely, making the purchase of items impossible in the coming days.

Attempts by some Daily Graphic reporters to explain that the markets would be closed for just a day for the disinfestation exercise and opened again were met with skepticism.

“Whether or not the markets will be closed for one day is not important. I am just getting myself prepared for anything. Moreover, my children are all home and so this is the best time to stock up to meet the demand at home,” one buyer told Jennifer Kwasin, our reporter who visited the Malam Atta Market.

Justice Agbenorsi reports from the Ashaiman Market that apart from the long queues and heavy congestion, the panic buying also resulted in the increment of the prices of certain commodities.

A shopper, who gave her name as Mercy, said a tuber of yam which she used to buy for GH¢10 was sold for GH¢12, while the price for a cup of gari had increased from GH¢1.50 to GH¢2.

“This coronavirus is really having a negative impact on our finances,” she said.

From Sekondi-Takoradi, Dotsey Koblah Aklorbortu reports that the Sekondi-Takoradi Metropolitan Assembly (STMA) cancelled a planned fumigation of all markets and public places.

The Public Relations Officer of the STMA, Mr John Laste, said the cancellation was as a result of directives from the sector ministry.

“We are meeting tomorrow (today) for new dates to spray markets in the metropolis and it will be communicated to you accordingly,” he said.

Dates will be fixed for metropolitan, municipal and district assemblies across the country to carry out the exercise on different dates.