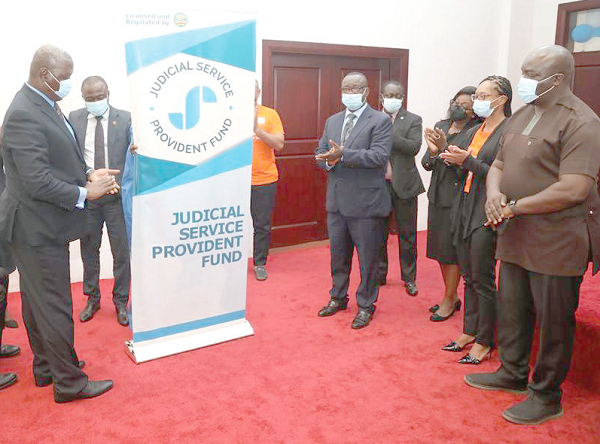 The Judicial Service Staff Association of Ghana (JUSAG) has launched a third-tier pension scheme for its members.

The launch of the Judicial Service Provident Fund (JSPF) scheme formed part of efforts to enhance pension benefits and increase retirement income security for members of the association.

A board of trustees of the scheme was also inaugurated.

A Justice of the Supreme Court, Justice Paul Kwadwo Baffoe-Bonnie, led the board of trustees to take the oath of office and secrecy.

The board is chaired by Mrs Gifty Preko Nyarko, with Mrs Grace Brown as its secretary.

Service providers of the JSPF include Old Mutual as fund administrator, Databank Asset Management Services Limited and InvestCorp Asset Management as fund managers and Guarantee Trust Bank as custodian of the fund.

The Chief Justice described the scheme as a milestone in the history of JUSAG which he said would help better the conditions of members.

He said the problem of poor working conditions of service of members of the association had been of concern to him, adding that “gradually, we are making inroads to better the conditions of most of you, especially those on retirement”.

“We don’t want to maintain the status quo, it doesn’t speak well of us if those who make the service run are the very people who are not taken good care of,” the Chief Justice added.

Justice Anin Yeboah further charged members of the board of trustees to be committed to the JSPF, adding that “your attitude to work should not be relegated to the background.”

For his part, the President of JUSAG, Mr Alex Nartey, explained that issues of pension for retirees had been at the heart of management and that in 2017, the current leadership birthed the idea of the third-tier pension scheme which was subsequently approved in 2018 at the triennial delegates conference of JUSAG.

He said under the third-tier pension scheme, a staff who contributed GH¢100 for 20 years would be expected to receive not less than GH¢105,756.

“Clearly, without a tier-three, our pension lives would be miserable,” Mr Nartey said.

Mrs Nyarko expressed appreciation for the confidence reposed in them and said since the board was established in 2018, it had worked hard to obtain accreditation from the National Pensions Regulatory Authority (NPRA) and also entered into agreements with the service providers.

“We are excited that we have been formally inaugurated to even work harder for staff of the Judicial Service who would ultimately be the beneficiaries of this scheme,” she said.

Mrs Nyarko assured members of JUSAG of fund security, adding that the fund would be used for wise investments and, therefore, urged members to sign onto the scheme.