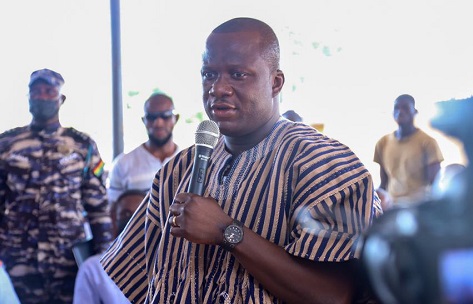 The Minister of Lands and Natural Resources, Mr. Samuel Abu Jinapor, has expressed concern about the extent of land degradation in the Ahafo Region as a result of illegal mining and called on chiefs to assist in the implementation of measures to stop the situation.

"I am amazed by the extent of land degradation as a result of activities of illegal miners in this area", he stated during a meeting with members of the Ahafo Regional House of Chiefs in Goaso, the regional capital, today.

"When I observed the situation from the air today, I was convinced that we need to do more to fight this scourge in order to save our lands for posterity ", he stated.

The meeting with members of the Ahafo House of Chiefs formed part of the minister’s one day visit to the region to seek support from stakeholders for the success of government's quest to protect the country’s natural resources from further degradation.

Mr. Jinapor explained that even though the government granted concessions, chiefs were custodians of the land and needed to be involved in efforts to protect the land.

"We are planning to take stakeholders, including chiefs, to the various degraded places in addition to providing them with the opportunity to have an aerial view of the extent of degradation', he stated.

Mr. Jinapor said it was disheartening that illegal miners had extended their activities in the middle of forests in the Ahafo Region.

Commenting on illegal logging in the area, the minister said two notorious galamsey groups, Salisbury 11 and Malik Nine, operating in the area had been declared wanted.

"Members of the security services are on the heels of members of these illegal galamseyers who are using sophisticated weapons to carry out their activities", he stated.

"When I arrived here, I have been informed that these groups are terrorising security officials and we will make sure that they are brought to book to ensure sanity in our forest reserves ", he stated.

For his part, the Omanhene of the Goaso Traditional Area, Nana Kwasi Bosomprah, called for stringent measures to deal with people who had taken the law into their own hand to destroy the country’s natural resources.

He said more soldiers should be permanently stationed in the various forest reserves to put fear in those who were illegally harvesting trees and digging for gold.

The President of the Ahafo Regional House of Chiefs, Nana Ansa Adu-Baah, commended the government for its bold attempt to stop illegal mining and indiscriminate cutting of trees.

He said chiefs in the area were not happy about how the natural resources of the area were being illegally plundered to enrich a few individuals and pleaded that they were ready to support the government to put a stop to those illegal activities.

The Ahafo Regional Minister, Mr. George Boakye, said his administration would not relent in its efforts to deal with illegalities being committed by the galamseyers and illegal loggers.