Independence Day without march past 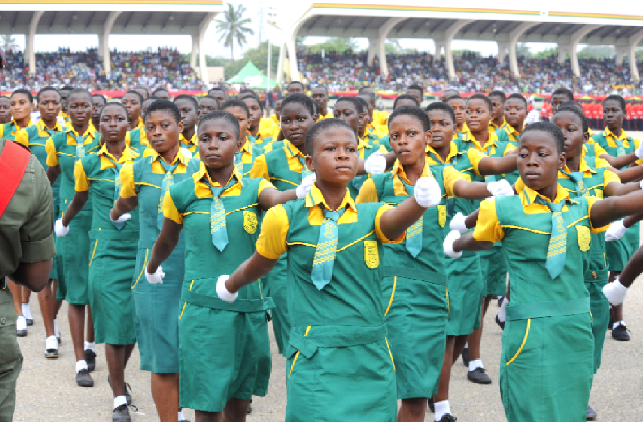 For the first time in decades Ghana will mark its Independence Day anniversary without the traditional march past of the security services and selected schools at the national, regional and district levels.

It is because the President has suspended the mounting of parades as part of activities to mark Ghana’s 64th Independence Day celebration.

This situation has been brought about by the COVID-19 pandemic and the need to observe the World Health Organisation (WHO) and Ghana Health Service (GHS) prescribed safety protocols which include social distancing.

The government’s directive to the Ghana Education Service (GES) on February 11 stated that it was in line with measures put in place by President Nana Addo Dankwa Akufo-Addo himself to avoid large gatherings as the country continued to deal with the COVID-19 pandemic.

All metropolitan, municipal and district education directors and heads of all schools have, through their Regional Education Directors, been asked to comply with the directive, the memo by the GES said.

“Management of the Ghana Education Service wishes to inform all regions that the 64th Independence Anniversary Parade on the 6th March 2021 has been suspended forthwith across the country,” the GES memo stated further.

No celebration in Upper East Region

Vincent Amenuveve reports from Bolgatanga that as a result of the directive,the Upper East Region will not organise any activity to commemorate the Independence Day celebration today.

He said when contacted, both the Regional Coordinating Director, Alhaji Mahamadu A. Azonko, and the Regional Director of the Ghana Education Service, Mr Edward Azure, were of the view that because of the restrictions imposed by the government due to the COVID-19 pandemic, the region was also observing the directives strictly.

Alhaji Azonko further explained that it was better for people to stay indoors if they had nothing doing outside as a way of helping to contain the spread of the virus.

However, Benjamin Xornam Glover reports from Tema that the Tema Metropolitan Assembly (TMA) has indicated that while observing all the safety protocols it would use today, Saturday, March 6 (Independence Day) to carry out a clean-up to keep the metropolis clean.

Speaking to the Daily Graphic in Tema, the Public Relations Officer of the TMA, Mr Frank Asante, said one of the major concerns of the assembly was how to improve on the sanitary conditions in the area, and it would like to use the day to reach out to residents “as we observe the day by engaging in clean-up of the immediate surroundings”.

He said the assembly would deploy its information vans and task assembly members and community leaders to coordinate the process by ensuring that residents keep their homes and immediate surroundings clean.

Mr Asante said the MCE for Tema, Mr Felix Mensah Nii Anang-La, and his team would tour the metropolis and observe community response to this call, adding that households and individuals who heed to the call will be recognised by the assembly.

He pointed out that the clean-up exercise was aimed at invigorating the communal spirit of the people in the metropolis and stressed the need for all residents to respond and be responsible for the promotion of sanitation in the metropolis.