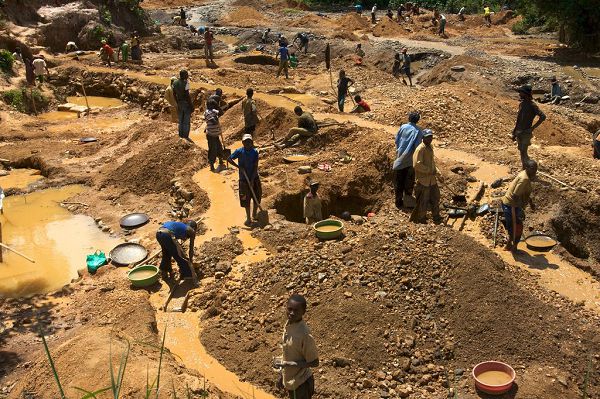 The fight against illegal mining is far from over because some small-scale miners and illegal miners have begun operating, in violation of the law.

While some small-scale miners who were vetted and cleared by the Inter-Ministerial Committee on Illegal Mining (IMCIM) are mining without operating permits, some illegal miners are also having a field day in the Wassa Amenfi municipality in the Western North Region.

By the resurgence of illegal mining, it appears that the licensing regime by the IMCIM aimed at sanitising the small-scale mining sector is not making the desired impact.

About 900 small-scale miners who were cleared by the IMCIM to return to their concessions following the lifting of the ban on small-scale mining were required to obtain operating permits from the Minerals Commission before they began their mining activities.

However, some small-scale and illegal miners have started operating in the Wassa area without the required permits.

This came to light when the Minister of Lands and Natural Resources, Mr Kwaku Asomah-Cheremeh, toured some mining companies in the Western, Western North and Ashanti regions yesterday.

It was observed that some of the small-scale miners were busy engaged in what the minister described as "illegal mining" along the road.

At Wassa Anankor, for instance, scores of the illegal miners ran for cover when Mr Asomah-Cheremeh and his entourage stopped to inspect their activities.

Some who later came out of their hideout after the team leader had been apprehended by the minister's bodyguard claimed that the concession belonged to T.T. Brothers Company in Accra, adding that they were only caretakers of the concession.

There was a signpost at the concession, with "TT Brothers Company" and the IMCIM clearance embossed on it, giving the indication that the company had been cleared to mine.

However, the Chief Inspector of Mines at the Minerals Commission, Mr Kofi Adiei, who was part of the entourage, confirmed that the company had not acquired the necessary operating permit from the commission to move into its concession to mine.

Against that backdrop, Mr Asomah-Cheremeh directed all small-scale miners who had been cleared by the IMCIM to ensure that they acquired operating permits from the Minerals Commission before they could enter their concessions to mine.

He stressed that the ministry would crack the whip on any company which flouted the rules of engagement.

"Acquiring clearance from the IMCIM is not enough for one to start mining. I am very shocked at what I am seeing here because it is not acceptable.

We will arrest and sanction any company which goes contrary to the law," he stressed.

Meanwhile, illegal miners have also invaded the concession of CNG Alaska Mining Company at Diaso in the Western North Region, three months after the company was ordered to stop mining in the area over contract issues.

On seeing the team, they ran away, leaving behind some equipment and the food they had prepared.

The about 70km square concession was inundated with pits that had supposedly been dug by the illegal miners.

The General Manager of CNG Alaska Mining Company, Mr Donald Entsuah, said he had no control over the concession, since the state had ordered the company to halt its operations and the issue was being litigated in court.