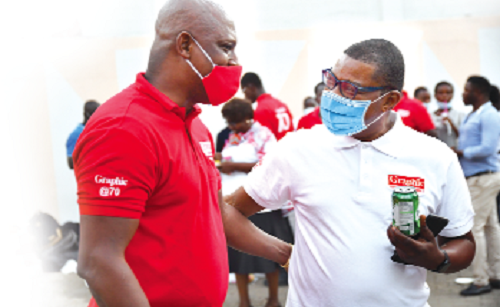 Mr Kobby Asmah (right), Editor of the Daily Graphic in a hearty chat with Mr Ato Afful, MD of the Graphic Communications Group Ltd, at the reception as part of the 70th anniversary of the company yesterday. Picture: EBOW HANSON

Seven decades of being a leader in the newspaper industry and business in a developing economy such as Ghana’s is a unique attainment.

Staff and management of the Graphic Communications Group Limited (GCGL), the country’s reference print media house, marked the company’s 70th anniversary in grand style with a float, a mini-durbar and a cocktail party before the symbolic cutting of the anniversary cake climaxed events in Accra yesterday.

Some staff of the company enjoying themselves during the reception. Pictures: EBOW HANSON

The premises of the company’s head office was awash with the red and white colours of the company as the T-shirts-wearing staff gave expression to the years of dedication, commitment, and all that had elevated the Graphic brand to golden standards.

With cups of drinks and sticks of kebab in hand, the dance floor looked a strange environment for journalists and auxiliary staff before dusk on a working day, but the occasion — amid full production work in all departments — was probably the best reward for years of hard work and immersion into a daily news production routine.

Selfies and group photos were a common feature at every table — junior and senior, as well as management staff all taking part, as some still fed their social media accounts with pictures and snap comments.

At a point, the Managing Director, Mr Ato Afful, in his red polo shirt over a blue jeans trousers, walked to every table, giving an elbow shake to every member of staff, portraying the ambience of camaraderie in the work environment.

In a short address, Mr Afful challenged the current staff to work hard to transform the company into an even greater enterprise to sustain what the predecessors had bequeathed to them.

He said it was not out of the reach of the current staff to ensure the sustainability of the company for the next generation of staff to take over.

He added that the company’s staff and management had the needed competencies and skills set to positively transform and sustain the company.

"We have the people, the commitment and the skill to make this possible," Mr Afful said, adding that those who started the company some 70 years ago might not have thought that a day would come that the business of the company would be digital, as it had now become.

He pledged, to a thunderous applause from the staff, that starting this October, the company would hold a “get-together” for the staff at the end of every month.

He, however, urged staff to continue to deliver their services effectively and efficiently.

Mr Afful, on behalf of the management and the board, congratulated the staff on their dedicated service over the years.

Time for the popping of champagne

It was a journey of fun as the company went on a float through some principal streets of Accra to climax the 70th anniversary celebration.

Led by management staff, the float started from the premises of the Graphic Head office at Adabraka, through to the National Theatre, Parliament House, Osu, Kwame Nkrumah Circle Interchange, Mpamprom, Obetsebi Lamptey Circle and ended at the company’s head office.

During the float, the day’s edition of the Daily Graphic and face masks were distributed to the public to encourage reading and to support the fight against COVID-19.

Some staff expressed their excitement on the successes chalked up by the company, promising to work towards providing authentic and accurate information, particularly, during the 2020 elections.

On October 24, the 70th anniversary celebration will be climaxed with an anniversary awards night and a ball.