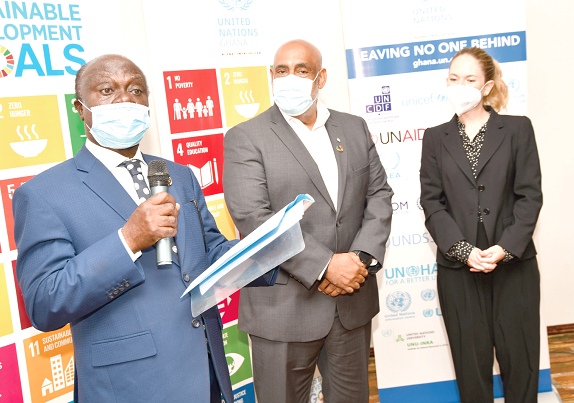 The government and the United Nations (UN) office in Ghana have launched a project to mobilise resources to finance initiatives in key sectors of the economy towards the attainment of the Sustainable Development Goals (SDGs).

The SDG financing mobilisation project, which is for two years, will also go to consolidate investments and deepen gender-responsive budgeting and accountability and accelerate the realisation of the global goals by 2030.

The fund-raising project is estimated to raise $2.3 million over the two-year period from the SDG Fund.

At the launch of the project in Accra yesterday, the UN Country Representative for Ghana, Mr Charles Abani, explained that the funds to be realised would go to help address the funding gaps in the SDG initiatives, especially in the wake of the coronavirus disease (COVID-19) which had caused many countries to shift their focus from financing major development projects.

He stated that although the UN had declared 2020 as the Year of Action towards accelerating efforts to achieve the SDGs, the outbreak of COVID-19 had worsened the financing needs such that pragmatic steps were required to resolve the issue.

For instance, Mr Abani said COVID-19 had imposed an estimated $114 billion financial burden on African countries this year alone, as well as a financing gap of $44 billion.

"While Ghana's economy is well known to be recovering faster than estimated, about $4.4 billion is very much needed to close COVID-19 induced financing gap and to finance economic response and recovery programme," he said.

He added that such financial burden made the financing of SDG initiatives dire.

“This is especially so when some $7 trillion was required to achieve the SDGs, with an annual investment gap of $3 trillion in private and public financing,” he said.

He said it was against that background that the launch of the SDG financing project was key to putting Ghana on the right path to achieving the global goals which were due in the next 10 years.

The Minister of Planning, Professor George Gyan-Baffour, described the project as a major step towards the attainment of the SDGs.

He said the government's ability to mobilise, sequence and put the variety of financial sources to effective deployment was key in achieving the global targets.

Prof. Gyan-Baffour said an assessment of the country's progress with the SDGs had shown that more work needed to be done to realise the goals.

"It is in this circumstance that the government and the UN country team have responded to the call on SDG financing and to broadly pursue strategies to consolidate SDG financing initiatives and strengthen gender-responsive SDG budgeting and accountability," he said.

In 2015, world leaders made an ambitious commitment to achieve the SDGs by 2030.

The SDGs and agenda 2030 are a commitment to eradicate poverty in all forms and achieve sustainable development to ensure that no one is left behind.

Funding gaps have been identified as one of the greatest challenges to the realisation of the SDGs.

The UN came up with the SDG financing initiative to enable developing countries to accelerate the processes of achieving the goals through projects that can attract public and private capital.

Twelve countries contribute to the SDG Fund, with six of them having presence in Ghana: Denmark, Germany, The Netherlands, Norway, Switzerland and the European Union (EU).

UN agencies such as the WHO, UNICEF, UNDP and UNOPS also contribute to the fund.