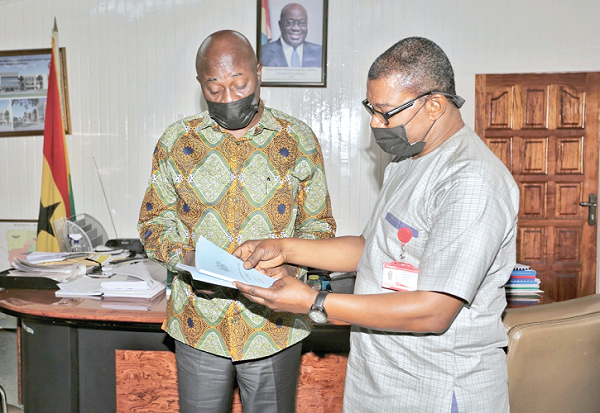 The Births and Deaths Registry will soon be revamped to play its role as the primary gatherer of data for Ghana’s development.

In line with that, the head office of the registry in Accra will be relocated and digitally equipped to discharge its mandate, as well as efficiently exercise oversight responsibility for the registration of births, foetal deaths and deaths across the country.

In furtherance of this, a Registration of Births and Deaths Act, 2020 (Act 1027) has been promulgated and is awaiting a regulation to be passed by Parliament to operationalise it.

In an interaction with the Editor of the Daily Graphic, Mr Kobby Asmah, yesterday, the Minister of Local Government and Rural Development, Mr Dan Botwe, described the plight of the registry as a blot on the conscience of the nation and bemoaned the way Ghana had treated the registry.

“Certainly, as a government, we will give the registry all the necessary push within the next few weeks to provide for its decentralisation to improve the collection and collation of statistics for national development and other related matters.

“The registry must have all our primary records, and I am happy to say that the President is fully committed and has given us all the assurance to get the registry modernised and provided with lot of logistics within the shortest possible time,” he said.

Mr Botwe, who is also the Member of Parliament (MP) for Okere, said the problem in Ghana was that the performance of a government was always measured in brick and mortar, as against equipping critical institutions such as the Births and Deaths Registry to work efficiently.

He said it was ironic that many people in the country who wanted visa to travel abroad “are all born in Accra”, for convenience, adding that soon the registry would be equipped to be more effective and efficient.

“Now that we have an act and a regulation is soon to be in place, the Local Government Ministry is working closely with the Lands Commission to also identify a location to put up a permanent new head office building for the Births and Deaths Registry,” the minister said.

Mr Botwe said while it was encouraging to place much attention on the national identification programme, for instance, it was equally imperative to fully support the Births and Deaths Registry as the central point for data collection.

Another critical area of concern which needed prompt attention, the minister noted, was the Department of Parks and Gardens.

He said significant efforts had been put in to get the department working, saying: “If supported and managed well, the Department of Parks and Gardens could generate a lot of economic activity for the nation.”

He said most of the medians in the country were in bad shape, with many of them overgrown with weeds, a situation that could undermine efforts to make Accra beautiful.

In that vein, he called on corporate institutions to consider adopting and sponsoring a median or two and transforming them to beautify the city.

To feel the government’s presence at the local level, Mr Botwe said premium was on effective supervision at the metropolitan, municipal and district assemblies (MMDAs).

The whole idea, he explained, was to make the MMDAs effective to play their much expected role at the local level.

As the liaison between the government and the citizenry, he said, the assemblies must be in constant touch with the people, endeavour to bring development to their doorstep and explain government policies to them to get the buy-in of the citizenry.

In all of that, Mr Botwe underscored the need for effective, fair, principled and strong leadership at the local government level to function effectively.

Mr Asmah, for his part, called for intensified public education on all the activities of the ministry and its related agencies to get the citizenry on board to play their expected roles.

Furthermore, he insisted on proactive and innovative measures by metropolitan, municipal and district chief executives (MMDCEs) to make the assembly concept meaningful and functional.

He said political will and commitment were critical to meet the needs and expectations of the people and quicken the pace of development at the local level.

He pledged the commitment of the Graphic Communications Group Ltd (GCGL) to support the good work of the Ministry of Local Government in its public education drive to serve the interest of the people better and bring good governance to the doorstep of the citizenry.