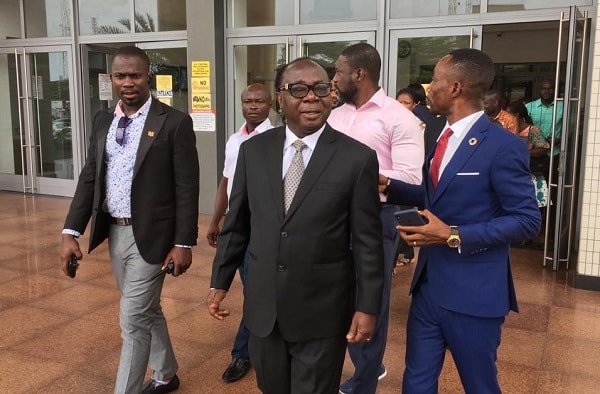 The National Chairman of the ruling New Patriotic Party (NPP), Mr Freddie Worsemao Blay, is challenging a contempt case against him at the Accra High Court initiated by the Commission on Human Rights and Administrative Justice (CHRAJ).

In his affidavit in opposition, he described the contempt application as “fatally flawed and procedurally incompetent”.

CHRAJ dragged Mr Blay to court over allegations that he had persistently failed to respond to several requests from the human rights institution to furnish it with information on the 275 buses he was supposed to have brought into the country and donated to NPP  constituency offices in the run-up to the party’s National Delegates Conference last year.

CHRAJ prayed the court for an order to commit Mr Blay into prison custody for disobeying its lawful requests.

“CHRAJ did not serve me”

It is, however, the argument of Mr Blay that CHRAJ had not served him with any process for him to respond.

“There is no proper evidence, directly or indirectly, that I have been personally served with any process from the applicant’s office,” he averred in his affidavit in opposition.

He further contended that since he had not been personally served with any process, CHRAJ was wrong in law to cite him for contempt.

“I have not exhibited any conduct contemptuous of the court or CHRAJ. I have not looked down upon CHRAJ, disobeyed any directives, orders and instructions of CHRAJ,” he argued.

At yesterday’s hearing, the court, presided over by Justice George Koomson, directed the two parties to file their written submissions within 14 days.

The court adjourned the case to July 24 to deliver a ruling on the contempt application.

According to the motion for contempt, on July 6, 2018, CHRAJ received a complaint from the Coalition of Social Justice requesting the commission to investigate Mr Blay for corruption in respect of his role in the purchase of 275 buses for the 275 constituencies of the ruling party, the NPP.

After assessing the complaint, the commission concluded that it had the mandate to investigate and, therefore, commenced investigations.

The motion stated that on August 20, 2018, CHRAJ wrote to the respondent to submit his comments on the allegation “within 10 working days, unless he admits to the allegations”.

“The said letter was duly delivered to the respondent, but he failed, refused and neglected to oblige the commission with his comments as requested,” it stated.

That letter, according to the motion, was again ignored by the respondent (Mr Blay).