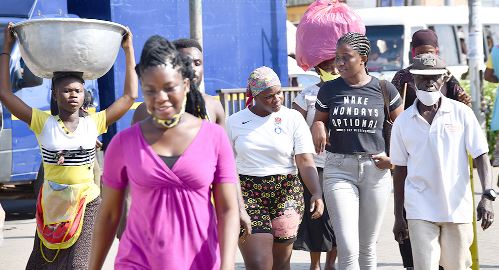 Some pedestrains in Accra Central, without face masks
30.5k Shares

Many people are ignoring the advice for adherence to the COVID-19 safety protocols, particularly the wearing of face masks in public.

The general excuse is that the virus has been conquered and, therefore, posed no further threat.

That development poses a threat to the strides made in the fight against COVID-19, and the fear in some circles is that Ghana could experience a resurgence in active cases if the protocols continue to be ignored.

The government introduced a range of measures aimed at stopping the spread of the virus, and last Sunday, President Nana Addo Dankwa Akufo-Addo extended, by an additional three months, the Executive Instrument (EI) making the wearing of face masks in public compulsory and warned that the law enforcement agencies would be required to ensure that the directive was respected by all.

This had also been corroborated by a number of health experts who have all stressed the need to wear the face mask as a key preventive measure against the COVID-19 pandemic.

However, the Daily Graphic has observed in Accra that many people have been going about in public without face masks, while many sanitiser dispensers at places where people visit for business are empty.

Also, the handwashing facilities mounted at many public places to enable people to conveniently wash their hands have become decorative pieces.

Besides, apart from the churches, mosques and some pharmacies, most places are not observing the protocols on social distancing.

The situation at the Madina Market

Currently, many countries are experiencing a second wave of the spread of the virus and the attitude and negligence of many people in Ghana could lead the country along that path.

Delivering his 17th address on COVID-19 to the nation last Sunday, President Akufo-Addo said since March, when the initial two cases were recorded, Ghana had now recorded about 49,000 cases.

In the past week, the Daily Graphic went round Accra to find out how people were observing the protocols and if the regulations were being enforced.

From hawkers on the streets to traders and market women, most of the people encountered did not have face masks on.

The few who were spotted with the masks had them on their chins, held them or they were halfway in their pockets.

Funerals have become what they used to be in the past, and with the exception of adherence to the protocols in some churches, people converge on funeral grounds or gatherings with very little regard for the protocols.

Also, about 90 per cent of patrons of intra-city public transport, popularly referred to as ‘trotro’, no longer use face masks.

Although the Ghana Health Service (GHS) had said commercial bus operators were allowed to operate at full capacity because activities that facilitated the spread of the virus, such as talking and singing, were minimal in commercial buses, the situation seems otherwise.

The Daily Graphic also observed that while almost all trading and service provision outlets had Veronica buckets at their entrances, they did not contain water or there was no soap to wash hands, or both.

It was observed that a few of those who had water, soap and tissue did not even bother to find out if patrons of their facilities washed their hands or not.

Additionally, the police had abandoned their role of enforcing particularly the wearing of masks in public.

While the general situation looked worrying, a number of corporate institutions, such as the Graphic Communications Group Limited, some financial institutions and supermarkets were strictly adhering to the “no mask, no entry” and the mandatory washing or sanitising of hands before entry policies.

Some of the countries that were hard hit between last March and June but which did well to control the infection have begun recording a second wave, which has compelled leaders of those countries to consider re-introducing restrictions again.

In spite of the potential threat, most people the Daily Graphic spoke with were of the opinion that the situation had been kept under control and so there was no need to strictly adhere to the protocols.

“The battle against COVID-19 has been won. No one talks about it any longer. If it were, President Akufo-Addo would not have allowed us to get back to normal life. So I think we have nothing to be worried about any longer,” Yaw Bawua, a trader, said when asked why he was not in a mask.

A bread seller, Kofi Twum, said: “I do not see why we should be forced to wear face masks, since it’s obvious that either the virus is gone or it never existed in the country. Can’t you see that many people are not wearing masks? But we are being told there is a sharp decline in active cases.

“They are telling us that majority of the people have recovered. For me, if people recover this fast and many people are not being infected, why are they worrying us?” He asked.

Others who were interviewed also said they had problems with breathing well when in the face masks, and since it was obvious Ghana was out of the woods, there was no need for them to stress themselves by wearing the mask.

A woman who runs a supermarket, Ms. Mary Tetteh, said all she was looking forward to was good sales, and that she was less concerned about patrons washing their hands.

She said it was clear that the COVID-19 was not an African disease and asked: “If it were so, why is it that several people have recovered from it?”

Reacting to the seemingly lax attitude of the law enforcers to ensure adherence to particularly the wearing of face masks, the Presidential Advisor on Health, Dr. Anthony Nsiah-Asare, said although the security agencies had been tasked to ensure that people wore masks, as required by law, the advice was for the law to be enforced with a human face.

“They [police] have been asked to add a human face to their duty of enforcement; but when persuasion fails, force will be applied, and so if people do not adhere, they will have themselves to blame,” he said.

He explained that the police had been asked to be considerate because not only was the law new; the wearing of masks was also a new way of life being encouraged, as well as the fact that wearing masks all day was a bit uncomfortable under hot weather conditions.

“However, people should be made to appreciate the need to wear masks and wear them right for the collective good of the entire population,” he stressed.

He said the national strides made were as a result of adherence to safety protocols, and that any breaches would erode national gains.

The Director-General of the GHS, Dr. Patrick Kumah-Aboagye, also said the disease was still around, and that the reduction in active cases was a better ground to intensify strict adherence to safety protocols, such as wearing of masks, cleaning of hands properly, social distancing and respiratory hygiene to help sustain the momentum towards winning the fight against the global pandemic.

In April 2020, the wearing of face masks was made compulsory in public in the Greater Accra Region and the Cape Coast metropolis.

The Ministry of Health also issued a directive in the same month telling citizens to wear face masks at public places where it might be difficult to maintain social distancing.