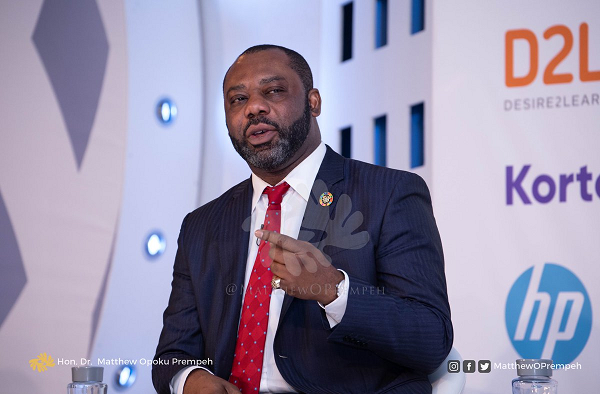 The government has saved $5 billion in the energy sector following the implementation of the Energy Sector Recovery Programme (ESRP) in 2019.

The savings are the result of the Cash Waterfall Mechanism and the Natural Gas Clearing House, established to ensure a weekly sharing of tariff revenues among players in the electricity value chain to improve liquidity in the sector.

The Minister of Energy, Dr Matthew Opoku Prempeh, disclosed this in a speech read on his behalf at a workshop for accountants held at Ada.

The three-day workshop was on the theme: “Effective Implementation of the Energy Sector Recovery Programme, the role of the Accountant”.

Speaking on behalf of the minister, the Coordinator of the Ghana Energy Sector Transformation Initiative (GESTIP) of the Ministry of Energy, Mr James Demitrius, said the waterfall was a payment system that allowed debtors to pay higher-tiered creditors their full interest and principals first before lower-tiered creditors received their principal and interest payment.

The ESRP started in May 2019 to make state-owned energy utilities (SOEs) financially sustainable, help them to balance their accounts by the end of 2023 and facilitate an efficient and reliable energy sector.

The minister expressed the commitment of all the stakeholders in the sector to clear the legacy debts to enable all agencies under the ministry to work effectively.

Dr Prempeh was also optimistic that the establishment of the two payment systems would bring the energy sector into balance and improve liquidity in the sector by the end of the ESRP in 2023.

A Senior Advisor to the Vice-President, Professor Kwaku Appiah-Adu, urged the participants to ensure the successful implementation of the Natural Gas Clearinghouse (NGC) concept of revenue distribution.

“It is critical that the processes were carried out consistently, accurately and in a timely manner. They must work with the private sector, state-owned enterprises and the Ministry of Finance to clear the books in an effort to reduce the tendencies for losses.

The Deputy Chief Executive Officer (CEO) of the Ghana National Petroleum Corporation (GNPC) in charge of Finance and Administration, Mr Benjamin Kweku Acolatse, challenged accountants to distinguish themselves by exhibiting high moral standards and organisational ethics in the performance of their professional responsibilities.

He said accountants formed the backbone of every organisation and failure to apply high ethical standards and morality in their work could have a negative impact and eventually lead to lack of public confidence in the profession.

Mr Acolatse added that as accountants they owed their organisations and the profession a duty to exhibit and adhere to the highest standards of professional integrity and ethics, stressing that their “academic qualification as accountants will be greatly undermined if not guided by ethics of integrity, objectivity, confidentiality, professional competence and due care as required of all accountants”.

Mr Acolatse reminded the participants that natural gas was a complex commodity and stressed that an accountant with a critical analytic mindset stood the greatest chance of impacting the system to deliver value for the betterment of the entity, the state and more importantly, the ordinary citizens of the country.

An independent accountant seconded to the Natural Gas Clearing House, Mr Leonard Akuffo-Kwapong, said upon assumption of office in October last year, he realised that accountants were limited to debits and credits and the preparation of the financial statements with a limited idea and understanding of the models underpinning their commercial operation.

He reminded the participants of their peculiar importance, especially in the energy sector at this point in time.

Mr Akuffo-Kwapong stressed that the majority of issues facing the sector were financial in nature and as accountants, they must be innovative and well equipped to resolve them early.