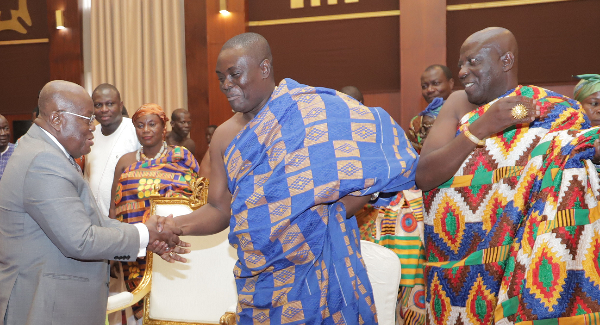 President Akufo-Addo (left) in a handshake with Osagyefo Oseadeeyo Agyemang Badu (2nd from right), the Paramount Chief of Dormaa Traditional Area, after the meeting. With them is Nana Bofobene IV (right), Omanhene of the Dwene Traditional Area. Picture: SAMUEL TEI ADANO Follow @Graphicgh

The President of the Bono Regional House of Chiefs, Osagyefo Oseadeeyo Agyemang Badu II, has commended President Nana Addo Dankwa Akufo-Addo for the social intervention programmes and development projects the government has embarked upon.

He said citizens of the region had benefitted from those initiatives, for which the chiefs and the people were most grateful.

He mentioned the free senior high school (SHS) policy, the One District, One Factory (1D1F) initiative and the expansion of the Sunyani Airport as some of the development projects the region had benefitted from.

He, however, said the area still needed more support to help improve the lives of the people and appealed to the President for more projects.

Oseadeeyo Agyemang Badu, who is also the Dormaahene, made the commendation when he led a delegation of chiefs and queenmothers from the region to pay a courtesy call on the President at the Jubilee House in Accra last Wednesday.

President Akufo-Addo said the first phase of the Sunyani Airport expansion project had been completed, and that the second phase would commence in September this year.

He said the Bono Region had also benefitted from substantial road projects.

Currently, he said, 81 road projects were ongoing in the area, with 19 of the projects, constituting 262 kilometres, being active, while the rest were experiencing some challenges.

“I have to be frank and tell the truth: those are challenges that we are trying to resolve,” he said.
Reacting to an appeal by the Dormaahene for improved infrastructure at the University of Energy and Natural Resources, the President said that the Dormaa Ahenkro Campus was benefitting from the construction of a lecture block, which was 95 per cent complete, while two other blocks that would be used as offices and laboratories were also 60 per cent complete.

On the Sunyani Campus, he said, work on the foundation for a four-storey lecture hall and a theatre block was ongoing, while work on the library, an office block and a new school gate was 70 per cent complete.

President Akufo-Addo gave an assurance that by the end of this year, all the projects would be completed.

On a proposal that the Sunyani Hospital be upgraded into a teaching hospital and linked to the university, he said a next Cabinet meeting would consider a joint memorandum from the Ministry of Education and the Ministry of Health on the issue.

The President further disclosed that there had been a meeting between the Ministry of Youth and Sports and C.K. Engineering Company, which had produced designs for the proposed 15,000-capacity Sunyani Sports Stadium project.

On the prevention of chieftaincy disputes, President Akufo-Addo advised traditional rulers to compile and document the history and lineages in their respective jurisdictions to prevent disputes.

He cited the recent launch of the ‘Kwahu State Book’ put together by the Kwahumanhene, which documented the history, lineage, families and successors of traditional leaders in the area and urged other chiefs to emulate that example.

According to the President, such codification and documentation would also avert situations where unqualified people created confusion and insecurity in their bids to be made chiefs.