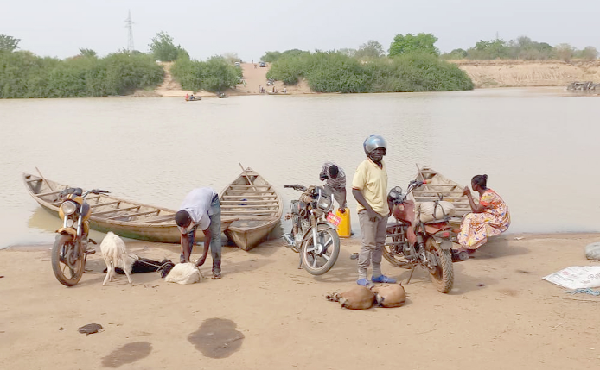 Some travellers preparing to board the canoes Follow @Graphicgh

Commuters face danger as they cross the White Volta River at Daboya in the North Gonja District on overloaded canoes which have no life jackets.

Hundreds of passengers, most of whom are traders, cross the river to and fro Daboya and its surrounding communities in the Savannah Region to transact their businesses without observing the required safety measures.

Operators of the canoes do not provide life jackets for the passengers to ensure that should there be any emergency, their safety would be assured.

When the Daily Graphic visited the area last weekend, it observed that many passengers were putting their lives in danger with the total disregard for the use of life jackets.

The situation is even made more precarious with the constant overloading of the canoes, numbering about 20 stationed at both sides of the river, with passengers, goods and motorbikes.

Canoe disasters have become an annual occurrence around the area as most commuters prefer using the canoe because that route is shorter, as it is only 48 kilometres to Tamale, the Northern Regional capital.

The Damongo-Fufulso junction road is the safest route to Tamale, but it is almost twice the distance across the river.

In 2014, at least six people drowned after a canoe on which they were travelling capsized in the Daboya White Volta River. A similar canoe disaster on the river claimed three teenage lives in 2016, while three other persons drowned and four persons were rescued in 2017 when their boat capsized.

Some passengers who spoke to the Daily Graphic lamented the lack of life jackets in the area, saying they had no option than to travel on the river without the life jackets as none was provided on the canoes.

“It is very scary to cross the river without wearing life jackets, but we don’t have any option now. If there is any disaster in the middle of the river, it will be very dangerous,” a passenger, Hajia Asebi, lamented.

She, therefore, appealed to authorities to provide the canoe operators with safety gears for onward distribution to passengers who patronised their canoes.

Another passenger, Frederick Salifu, recounted how he almost lost his life on the river sometime ago when the canoe nearly capsized, saying, “It was only God who saved us and the canoe operator managed to paddle us to safety.”

A canoe operator, Jamoni Baba, said the lack of life jackets was very worrying because it was very risky crossing the river without wearing them.

“We don’t have the life jackets; passengers always request for it but we don’t have some. Sometime ago some security personnel gave us some but they are spoilt, and since then we have not gotten some,” he said.

When asked how much they charged the passengers, he explained that “our work is just voluntary because we don’t charge anything. We don’t charge natives, but we only collect a small fee from strangers, which is not even compulsory for them to pay”.

He added that because they were only doing a sacrificial job, it was difficult for them to procure the life jackets for the passengers.

In an interview, a former Assembly Member for Daboya, Jamoni Hudu, who is also the leader of the canoe operators, appealed to the assembly and benevolent organisations to support them with life jackets to ensure the safety of travellers.

In 2017, the government announced the construction of a bridge over the White Volta at Daboya to link the Northern Region to the Savannah Region.

When constructed, the 300-metre stretch bridge spanning the White Volta River would be a critical link in the commercial and everyday life of people in the eastern parts of northern Ghana, and will serve as an alternative route for travellers from the north to the south and from the Savannah Region to the Upper West Region.

However, since the announcement, nothing has been done about it.

When contacted on the lack of life jackets, the Savannah Regional Director of the National Disaster Management Organisation (NADMO), Mr Mohammed Tohir, said the organisation had been supplying the canoe operators with the jackets every year to ensure the safety of commuters on the river.

“I am surprised you are saying there are no life jackets at the riverside because we have been giving them some. Last year for instance, we received life jackets from the Red Cross Society and other organisations and distributed to them.

He indicated that he would be following up on the issue in the coming days to ascertain why the operators were not using the life jackets.