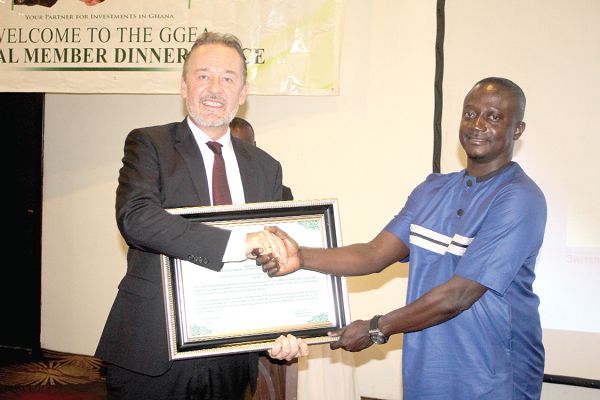 The Daily Graphic, the flagship newspaper of the Graphic Communications Group Limited (GCGL), was adjudged the Most Impactful Media Organisation of the Year by the Ghanaian-German Economic Association (GGEA) at a dinner dance and awards night in Accra last Saturday.

A citation accompanying the award said it was in honour of the Daily Graphic’s “consistent publication of the association’s events, and to a large extent, helped in establishing the credibility of the GGEA”.

“Your timely reportage has helped in creating a favourable image of the association and keeps boosting the reputation of the GGEA,” it added.

Other winners on the night included the Minister of Trade and Industry, Mr Alan Kyerematen, the GGEA Minister of the Year, and the Group Chairman of Kasapreko Company Limited, Dr Kwabena Adjei, Entrepreneur of the Year.

The Logistics Company of the Year award went to Consolidated Shipping Agencies Limited.

The event brought together partners, captains of industry and other stakeholders to celebrate the GGEA’s achievements in 2019.

It was also used to reward firms for their contribution to the association, as well as honour some organisations and companies for their excellent performance in the year of review.

The German Ambassador in Accra, Mr Christoph Retzlaff, said trade between Ghana and Germany had increased this year and that there were plans by the German government to roll out more investment projects in the country.

He said the German automobile giant, Volkswagen, would begin assembling vehicles in Ghana from next year, adding that it would boost economic and bilateral relations between the two countries.

He commended Ghana for its improved macroeconomic indicators in the last two years, saying: “Ghana has also succeeded in serving as the host nation to the African Continental Free Trade Area (AfCTA) and this will certainly boost its economy”.

Mr Retzlaff, however, called on the government to take the fight against corruption a notch higher as part of efforts to attract more international investors into the country.

He said for Ghana to become attractive to foreign businesses, the perception and reality of corruption must be dealt with head on.

According him, some international companies in Ghana had complained about corrupt practices and he entreated the government to take pragmatic actions to address the menace, adding that “this situation has to improve; we expect decisive actions from the side of the government”.

The President of the GGEA, Mr Stephen Antwi, urged entrepreneurs and owners of businesses in the country to adopt modern business approaches that supported partnerships with businesses from other jurisdictions.

Such a move, he said, would enable Ghanaian businesses to derive maximum benefits, especially as the country hosted the AfCTA Secretariat.

Mr Antwi, however, said the fact that Ghana had been selected as the host nation for AfCTA would not automatically translate into having all those big multinationals coming in, adding: “We need to approach this strategically and not go about it lackadaisically, else things will elude us and that will be a shame.”

He called on the Bank of Ghana to work assiduously to stabilise the local currency in the coming year, saying that the financial sector clean up and the depreciation of the cedi posed a challenge to businesses.