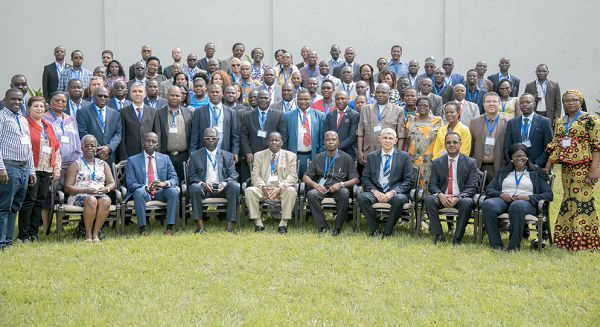 A section of the participants in the AU Forum on intra-African trade in animal commodities
30.5k Shares

The Minister of Trade and Industry (MoTI), Mr Alan Kyetematen, says the country is focusing attention on eliminating barriers to trade and strengthening regulatory, scientific and technological capacities to boost intra-African trade in animal commodities.

He said in the wake of the coming into force of the African Continental Free Trade Area (AfCFTA), it was important to promote trade in animal commodities since it had a great potential to create jobs and wealth and also be a catalyst for alleviating poverty.

"To achieve this, more deliberate steps are needed to reinforce public and private interventions in the value chain, strengthen regulatory enforcement, improve compliance with animal health and food security standards, enhance competitiveness and promote inclusive participation of women and the youth in animal resources," he said.

The minister stated this in a speech delivered on his behalf by the Director of Standards at MoTI, Dr Sanjay Kumar, at a forum on accelerating intra African trade and boosting Africa's trading position in the global animal commodity market in Accra yesterday.

The meeting was championed by the Africa Union (AU) Inter-African Bureau for Animal Research (AU-IBAR).

It was to enhance awareness of African countries on the opportunities and requirements for the operationalisation of AfCFTA in animal sources trade.

It was also a platform to update and share information among stakeholders engaged in animal commodity trade and related activities on the AfCFTA.

Additionally, it was meant to identify potential intervention areas for support and mechanisms for the efficient functioning of the African market.

Mr Kyerematen said Ghana had placed herself in a better position to play a lead role in promoting AfCFTA implementation to pave the way for a continental market; free movement of persons, capital, goods and services which were crucial for "promoting agricultural development”; food security; industrialisation and structural economic transformation".

He urged all African countries to be committed to removing impediments on the path of the implementation of AfCFTA.

In a speech delivered on his behalf, the acting Director of the Department of Trade and Industry at the AU Commission, Mr Hassan Hussein, said AfCFTA sought to strengthen Africa’s economic integration by creating a continental market.

He said the AU Commission and other partners were committed to working with all stakeholders to ensure that the AfCFTA was fully implemented in a manner that would benefit all countries.

Mr Hussein said the commission had been organising business forums with the aim to rally support and the expertise needed to implement the agreement.

“The aim of the business forum is to bring together African business leaders and policy makers to discuss and reflect on potential strategies for the successful implementation of the AfCFTA which will lead to the realisation of Africa’s aspirations as enunciated in Agenda 2063,” he said.