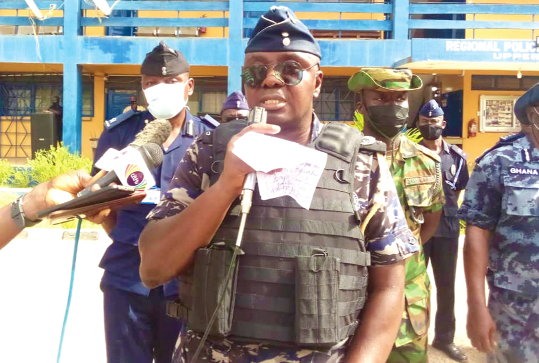 The Upper East Regional Police Command has launched a new Operational Patrol Model to revitalise efforts towards combating various forms of crime and help protect lives and property in the region.

The new operational strategy would also ensure that the Ghana Police Service in the region works effectively with other security agencies, particularly the Ghana Armed Forces, to deal with violent crimes that have characterised the region in recent times.

The new model will further ensure that personnel of the police command receive adequate capacity building and physical training frequently to boost their confidence and sharpness levels, to be able to deal effectively with security issues.

The Regional Police Commander, Deputy Commissioner of Police (DCOP), Dr Sayibu Pabi Gariba, made these known in Bolgatanga last Friday when he addressed the media after a route march by personnel of the Ghana Police Service and other security agencies through the major streets of the municipality.

Dr Gariba explained that the new model of operational patrol was necessitated by the upsurge in armed robbery cases and other violent crimes in the region.

He explained that the police command was poised to reduce the crime rate in the region.

The regional commander stated that since the visit of the Inspector General of Police, Mr James Oppong-Boanuh to the region last month, strategies had been put in place to reduce violent crimes.

As part of the new operational patrol model, Dr Gariba said the region had been zoned into three main areas — the Bawku, Builsa and Bolgatanga Central enclaves.

He explained that while the Ghana Armed Forces and the security agencies were supporting efforts to combat crime in the Bawku areas, the regional police command had beefed up security at both the Bawku and Sandema areas with enough personnel.

The command, he said, would also introduce market day escort for market women, especially at Sandema and its environs to protect them and their properties.

“In the Bolgatanga enclave, we are going to go this way; the highway within our region from Pwalugu through Bolgatanga to Paga is going to have highway patrol teams. Already, those patrol teams are operational because the national headquarters has supported us with vehicles and personnel that are actually patrolling the route,” DCOP Dr Gariba pointed out.

“We are providing escort for vehicles, transit vehicles right from Tamale through Walewale, Bolgatanga, Navrongo to Paga,” he added.

Dr Gariba further revealed that the regional police command and the Bolgatanga District Police Command had divided the Bolgatanga Municipality and its environs into four strategic patrol zones and would inundate the areas with visible patrols, surveillance and intelligence operations.

He stated that an agreement had been reached with the Ghana Armed Forces, especially the Eleventh Mechanised Infantry Battalion to back the operations.

The regional commander said all the operations and coordination would be backed by effective Information and Communication Technology.

He warned that the service would deal ruthlessly with any person or persons who intended to commit crimes in the region.

DCOP Gariba encouraged personnel of the police service to deliver on their mandate and support the system to work effectively, adding that citizens should consider policing as a shared responsibility and offer support and information to enable the personnel effectively combat crime in the region.