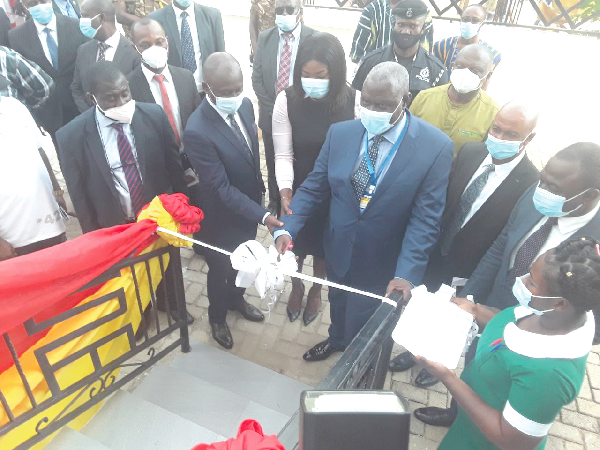 The Chief Justice, Justice Kwasi Anin Yeboah, last Thursday inaugurated the refurbished health centre at the Court of Appeal Complex for the Judicial Service in Kumasi.

The refurbished and expanded facility will attend to the health needs of the staff of the Judicial Service, judges and the general public.

From a two-room building, the new facility now has an eight-bed ward with a well-equipped laboratory, a well-stocked pharmacy with drugs, a consulting room and stores.

It was refurbished by GCB Bank Limited as part of its Corporate Social Responsibility (CSR).

At the programme, Justice Anin Yeboah said he was grateful to the GCB Bank Limited for assisting the Judicial Service with the refurbishment of the facility to provide the necessary healthcare needs of the staff of the service, lawyers and those who patronised the services of the courts in the metropolis.

He said the new health facility with the modern equipment would boost the morale of the staff.

Justice Anin Yeboah said even though the service was close to the major health facility in the region, i.e the Komfo Anokye Teaching Hospital, there was the need to have a health centre dedicated to the staff of the service which they could visit in case of emergency.

He said the facility was not for the staff of the service alone but was also open to the public, particularly the business community in the buzzing commercial area of Adum.

Justice Anin Yeboah said the newly refurbished clinic had been networked to provide paperless service, thereby reducing the use of paper and carrying of folders from one office to another.

A consultant to GCB Bank Limited and former Deputy Manager of the bank, Mr Samuel Amankwah, stressed the importance of good health to productivity, wealth creation and economic development.

He said it was in furtherance of that that as Ghana's first indigenous bank, “GCB Bank has invested substantially in the health sector over the years, and the renovation of the Judicial Service Clinic here in Kumasi is an example”.

He stated: “We have the responsibility to help drive Ghana's development agenda to create a prosperous society for all.”

He said the judiciary was a critical arm of the government and, therefore, deserving of every support. “Furthermore, Adum, where the clinic is located, is the nerve centre of the judiciary in the Ashanti Region,” he added.

For his part, the Supervising High Court Judge for the Ashanti Region, Justice Kofi Akrowiah, expressed his heartfelt gratitude to the Chief Justice and the GCB Bank for helping expand and refurbish the clinic for the staff from the previous two-room facility to its current status that could treat almost every case.

He said from 2010 when the clinic was established, attendance had seen a steady rise from the initial 170 patients to 1,286.

Justice Akrowiah said with the upgrade and a medical officer as head of the team, “I believe it is going to help us reduce absenteeism on the part of the staff on flimsy excuses of petty sicknesses and doubtful excuse duties”.

Justice Akrowiah appealed to the Chief Justice and the Judicial Service to help solve the accommodation challenges facing judges and magistrates in the region.

He said out of the 15 bungalows in the metropolis for judges, “only five are habitable, the rest are in deplorable states. As a result, five of our High Court judges in Kumasi are currently in rented accommodation”.

“This, in my respectful view, has security implications for such judges,” he said.

Aside from the accommodation challenges, he said there were also a lot of staff vacancies “which is impacting on our delivery”.