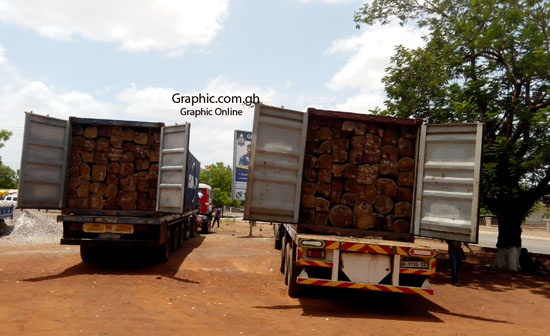 Some of the Rosewood impounded by the Police
30.5k Shares

The Northern Regional Police Command, last Sunday arrested a  43-year-old Chinese woman for illegally transporting a large quantity of Rosewood to Tema for export to China

suspect, Helena Huang, was , released on bail yesterday and was asked to report to the police today.

Ms Huang was the Vittin police checkpoint on the Tamale-Yendi highway escorting the trucks, with registration numbers BA 2225 C and GR9720-12, from the Yendi direction through the Tamale metropolis to Tema.

Two containers fully loaded with the redwood on board two articulated trucks have been impounded by the police.

Briefing the media in Tamale yesterday, the Northern Regional Crime Officer who is also in charge of the North East and Savannah regions, Superintendent (Supt) Otuo Acheampong, said the police received intelligence about the incident and immediately alerted the various checkpoints.

According to him, preliminary investigations revealed that the suspect was not having any lumbering certificate, passport and other valuable documents that permitted her to engage in Rosewood business in the country.

He added that investigation also revealed that Ms Huang had gained notoriety in the illegal Rosewood business in the Northern, Upper East and Upper West regions.
He said the suspect was currently in police investigation into the incident.

Following the ban on the harvesting and exportation of rosewood,  the Northern Regional Command, according to its Public Relations Officer (PRO),  Deputy Superintendent of Police (DSP), Mr Mohammed Yussif Tanko, had increased its surveillance at various check-points to help fight the menace.

He appealed to the public to volunteer information to the police that would lead to the arrest of persons engaged in illegal rosewood harvesting in the region.

In March, this year, the Ministry of Lands and Natural Resources ban on the harvesting and export of Rosewood in the country.

The ministry directed the Forestry Commission to suspend the processing of permits for the exportation of Rosewood.

However, some companies are said to be exporting the Rosewood using expired licences, while others have no form of permit.