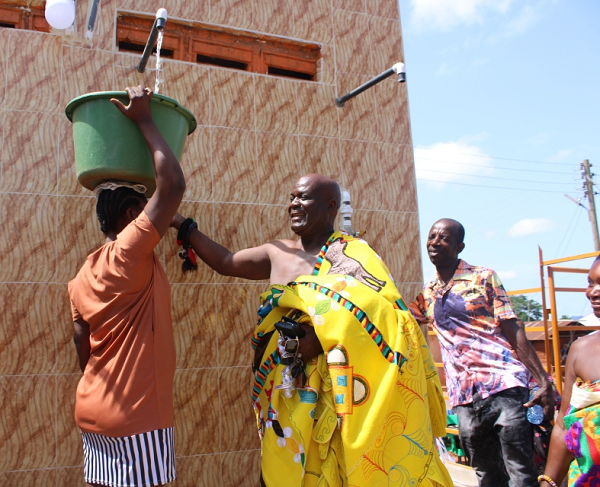 The Akyem Kotoku Mponua Gyasehene, Nana Kwesi Addo II, has built a mechanised borehole at Oworomera in the Eastern Region to address the water challenge in the community.

The project, which was inaugurated last Sunday (April 17, 2022), will serve over 1,500 residents who used to rely on a single borehole for water.

The newly commissioned water project named after the late Queenmother of Mponuaman and Pankese, Nana Yaa Asantewaa I, was the second to be constructed and commissioned in the past nine-month.

In an interview with journalists, Nana Addo II, explained that indigenes could not fetch water at the only borehole serving the community and thus, affecting daily lives negatively; hence, the need for a more advanced water system.

"Oworomera has only a bore serving over 1,500 inhabitants, and we know water is life. So we need to do more for our people, what they are in need of are the basic amenities and a more advanced one that could allow the vulnerable such as the aged, pregnant women and children to also fetch water unlike the borehole we currently have which requires a lot of force to operate," he said.

The Gyasehene of Pankese further said he took the initiative to build the water system because the government cannot be overly relied upon to do everything for every community across the country.

He added that it is also the responsibility of chiefs, and other well-to-do Ghanaians to find means of making life better for their people.

He added that as a project which belonged to the community, the responsibility to maintain the project also lay on the community, hence a fee of 20 pesewas would be charged at the site to fund the maintenance of the project.

The project has a 10,000-litre water tank for storage, with six pipes connected to it to serve multiple residents at a time.

In an interview with the Daily Graphic, the Krontihene of Oworomera, Nana Yaw Osae Kwapong, expressed gratitude for the project and pledged to help protect and maintain the facility to serve its purpose.

He added that the new water system would help curb lateness to school and absenteeism in school; as pupils spend a lot of time being in line to fetch water from the only existing borehole.

Ms Rachael Owusuwaa, a resident of Oworomera told the Daily Graphic that they have been expecting an extension of the water system from the government but to no avail.

She described the project as very timely, as it would help curb truancy in school and grant everyone in the community the opportunity to have access to potable water.