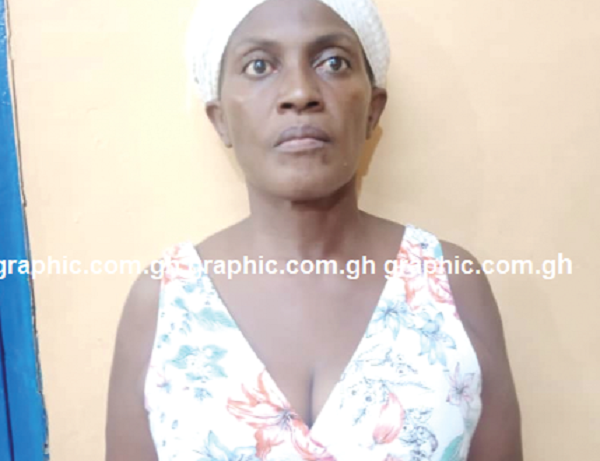 The caregiver at Happy Bloomers Creche at Agbogba, Clara Ayani-Ampah, who was arrested over the death of an 11-month-old baby girl, has been remanded in police custody.

The Adentan Magistrate Court remanded the suspect to reappear before the court on June 11, this year.

Ayani-Ampah was arrested after the parents of the baby girl reported the death of the child to the Agbogba police, North Legon, Accra, on May 18, this year.

A closed circuit television (CCTV) exposed Clara, who was seen in a video which has since gone viral, force-feeding the little girl in the school.

The baby was pronounced dead when she was taken to the North Legon Hospital.

The plea of the suspect was not taken, as the police have forwarded the docket on the case to the Attorney-General's Department and are waiting for advice on the certainty of charges to level against the 54-year-old Ayani-Ampah.

Her remand is also to allow the police to do further investigations.

According to a police report, the father of the victim on May 18, this year, reported to the Agbogba Police that the management of the school called to inform him that his daughter was sick and was taken to the North Legon Hospital but she was pronounced dead on arrival.

A team of police investigators went to the hospital and examined the body of the victim after which they conveyed it to the police hospital morgue.

A report of an autopsy conducted on the body is yet to be made available to the family.

The proprietress of the school, Mrs Christiana Atta Kumah, later handed over a CCTV of the day's activities in the school to the police which revealed how Clara had handled the baby.

The body has since been released to the family for burial.

In the video, Clara is seen trying to force some food substance in a cup, deemed to be porridge, into the mouth of the victim while she held the baby's hands tightly behind.

She is also seen pushing the baby's head into the cup in an attempt to get the little girl to eat, while the helpless baby, who appears to be suffocating, screams and throws her legs in the air.

VIDEO: How a caregiver maltreated baby who died later