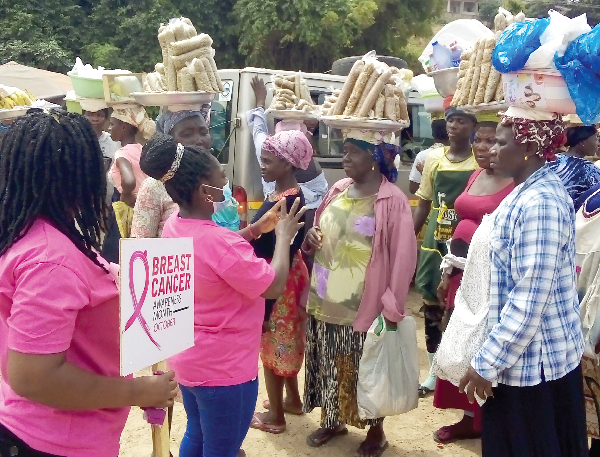 The Volta River Authority (VRA) medical team at Akosombo has organised a durbar on public education for communities in the Asuogyaman District as part of every October breast cancer awareness month.

The team held a durbar at Atimpoku, Senchi, Akrade and Akosombo among other communities aimed at educating women, particularly on the causes of breast cancer in order to prevent misconceptions about it.

Addressing participants in the various communities, the Medical Superintendent of the hospital, Dr Charles Arhinful, said breast cancer, which was common with women worldwide, was not a curse and a witchcraft spirit but purely a medical condition that was highly treatable and curable when detected early.

He said the misconception that breast cancer was caused by either a witchcraft spirit or a curse from their families was not true and stressed the need for that impression to be disabused.

Dr Arhinful said many were the people, especially women, who had the condition, but were misled and misconceived the idea that the purely health condition was a witchcraft spirit and also a curse which led many women to die earlier even though death was awaiting everyone.


He said but for the misconceptions that most people had, many breast cancer victims would have survived if they had availed themselves early for treatment. “When you wait and your condition gets to an advanced stage before you get tested, it might be too late”, he explained.

Earlier in the day, the health workers of the VRA Hospital went on float to some of the communities along the Akosombo -Accra highway with brassband music and placards to create awareness.
Some of the placards read: ‘’breast cancer is treatable and curable’’, ‘’don’t delay treatment of breast cancer’’, ‘’feel the boobs’’, ‘’October is breast cancer awareness month”, “get the message right”, “breast cancer is not curse and witchcraft spirit’’ among others.

Dr Arhinful stated that hitherto, the hospital had a challenge in getting access to the mammogram machine for breast cancer testing which was a huge cost to both the patient and the hospital and, therefore, the procurement of the machine by VRA Management to the Akosombo Hospital was more or less a blessing to the Asuogyaman community and the Eastern Region as a whole.