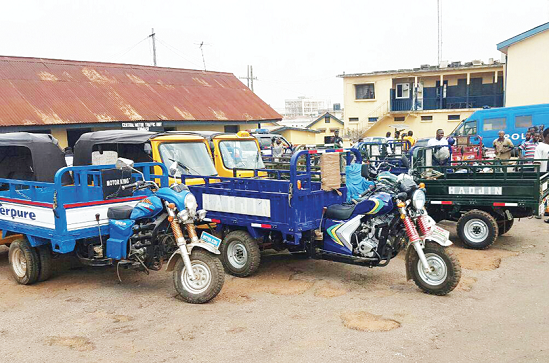 The carnage on the country’s roads continues to be of serious concern to governments past and present and all other stakeholders, owing to its devastating social and economic consequences.

One of the causes is the introduction of tricycles for both goods and passengers known as Aboboya and Pragya respectively, which has caught on, thus competing with regular vehicles on the highways.

Fresh on the minds of Ghanaians is the Appiatse explosion, which was triggered by an accident caused by a tricycle rider, and many such incidents.

Regulation 128 (1-4) of the Road Traffic Regulations 2012 states, inter alia: “The licensing authority shall not register a motorcycle to carry a fare-paying passenger.” However, in the Western Region, motorcycles as well as tricycles carry goods and sometimes up to seven passengers including the rider, on the highways.

In the quest of cargo owners to save cost from market centres to the city, they dangerously “monkey” or sit on the goods in the buckets of the tricycles and pickups to the points of delivery.

In Ghana, the origin of tricycles fitted with a combustion engine, is traced to the government’s effort in the early 2000s to handle three important problems in the country - sanitation, health and transportation of goods within short distances, which caused its introduction to communities.

However, these tricycles are now growing into a monster that would soon consume more through unsafe practices on the roads (highways), such as the overloading of goods, combining goods and passengers and travelling long distances on the highways, among others.

These tricycles, many not even registered, have become the preferred means of transport by traders for carting their wares, making the highways very unsafe in various parts of the Western Region.

Earlier this year, the President, Nana Addo Dankwa Akufo-Addo, speaking at the Kofi Annan Road Safety Awards, described road traffic accidents as a global pandemic and a critical public health issue that must be addressed immediately, due to the economic consequences.

The Minister of Transport, Kwaku Ofori Asiamah, also charged the National Road Safety Authority (NRSA) and the Driver and Vehicle Licensing Authority (DVLA), to bring sanity to the roads but there is still lawlessness, which is claiming human lives.

Interestingly, these tricycles loaded with goods and passengers go through various morning police checks on the streets of the Western Region— Biposo to Takoradi and from Agona-Nkwanta to Takoradi.

In the Western Region, Fridays and Tuesdays are Beposo and Daboase market days, and traders in Sekondi-Takoradi who visit these markets after their transactions, mostly cart their goods with tricycles.

On a recent visit to Shama, the Daily Graphic noticed riders of unregistered tricycles hauling goods such as building materials among other items from the market to Takoradi, by means of the highways, with the owners “comfortably” sitting on top of the goods in the speeding tricycles, oblivious of the dangers.

The focus of the minister obviously was to keep these motorised tricycles away from all major highways and principal streets and restrict their operations to community riding.

This move by the Greater Accra Regional Minister, which he did not propose as a personal view, but from the law should have been supported and welcomed by all other regions, but rather was welcomed with stiff opposing views with few supporting it.

While the focus of Mr Quartey was on the transportation of refuse on the highways and the city of Accra —in the Western Region, these tricycles are both for carrying passengers and goods. In instances where these tricycles are used to cart goods, they carry more than the required weight.

When contacted on the pragya and aboboya menace, the Western Regional Director of the NRSA, Nana Akua Ansah, said the next move was to prosecute the unrepentant riders.

“For some time now we have been doing a lot of sensitisation work to educate the commercial tricycle owners that the bike is not for carrying passengers,” she said.

The prevailing situation in various parts of the region especially on market days, she said, is that the tricycle is used to carry goods with passengers dangerously sitting on them.

The regional director said after embarking on massive sensitisation, it was just prudent that the authority with support from the police moved in to arrest and prosecute the offenders.

When contacted, the police said they were not in a position to grant interviews irrespective of the subject. However, a source close to the Motor Traffic and Transport Department (MTTD) of the Ghana Police Service, confirmed the collaboration with national road safety.

The source said, from next month, the MTTD will clamp down on these illegalities — using tricycles for purposes of carting passengers and goods at the same time.

“The team will arrest these tricycles and motorbikes, some of which are not even registered or road worthy, as well as arrest commercial drivers who use intersections and any empty space as a bus terminal,” the source said.