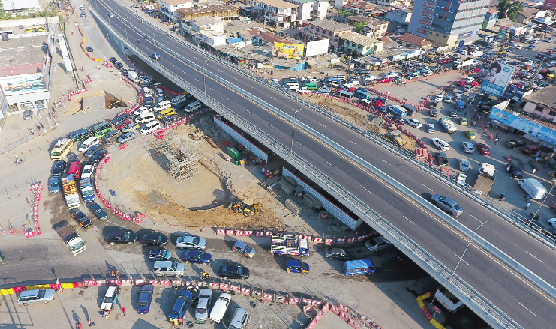 The government will start work on nine new major road projects in parts of the country this year and complete many others that are at advanced stages of completion.

Documents secured from the Roads and Highways Ministry indicate the new road projects as the Accra-Kumasi dualisation (in sections), the Kumasi South and Western Bypass and the Kumasi Outer Ring Road.

Also to start in the year are seven bridges, three of them major projects, and five new interchanges, all within the Greater Kumasi Metropolitan Area.

The bridges to be constructed this year include the Adawso-Ekyi Amanfrom Bridge, which will stretch over the three-kilometre wide portion of the Volta River and become the longest bridge in the country.

According to the information gathered from the ministry, the five interchanges in the Greater Kumasi Metropolitan Area will include the Suame, Santasi and Airport interchanges.

The Minister of Roads and Highways, Mr. Kwasi Amoako-Atta, said the government was determined to develop the road sector.

He said many construction projects, including flyovers, bridges and roads, had reached substantial levels of completion.

“Many of the projects throughout the country have reached the stage of substantial completion; that is, above 80 per cent. It is going to be a completion galore from now until 2024,” he said during the inspection of some road projects.

The documents obtained from the ministry, which have also been captured in the 2022 Budget, indicate that 42 road projects, which are between 12 and 96 per cent complete, would be continued this year.

“The road projects, which are found in each region, are at advanced stages and many of them will be open to traffic between this year and next year,” Mr. Amoako-Atta insisted.

They include the Accra-Tema Motorway, which is expected to start this year, and the Accra-Cape Coast-Takoradi project (208km), for which feasibility studies have been finalised.

The development of Tema arterial roads, which involves an upgrade of the Tema General Hospital Road into a three-lane dual carriageway, with service lanes and five interchanges, has been planned to be executed through a PPP.

The ministry said it was liaising with the Ministry of Transport for internal consultations with key stakeholders to explore other available financing options to ensure the start of the works in 2022.