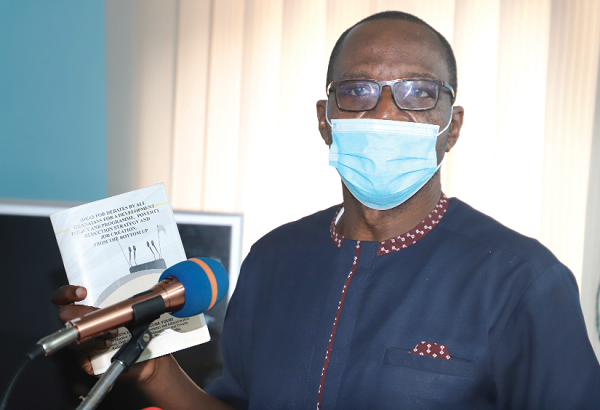 Titled “Ideas for Debate by all Ghanaians for Development Policy and Programme, Poverty Reduction Strategy and Job Creation from Bottom Up,” the book points to a long- term national development plan which captures the aspirations of Ghanaians.
During the launch of the book in Accra yesterday, Mr Youri said he adopted the ideas in the 89-pages book from India, where he studied.

He said the first two chapters of the book touched on industrial development policy as a means for poverty reduction.

“Therefore, a poverty reduction strategy should always aim at narrowing the gap between the rich and the poor and not at eradicating it,” Mr Youri said.

He said the third part, which touched on rainwater harvesting, explained how rainwater should be harvested during the rainy season.

While reviewing the book, the News Editor of the Ghana News Agency, Mr Samuel Osei-Frempong, said Mr Youri, in his book, adopted a simple style of writing to convey his ideas and concepts.

He said the book engaged readers and withdrew when they expected answer to his questions.

“He concludes the book by proposing a technocracy for Ghana, surprisingly, he does not propose an autocracy but rather call for referendum on the issue,” Mr Osei-Frempong said.

“He has had enough of the partisan politics and hopes for a day when all shades of opinion will be represented in Parliament,” he added.

The President of the Ghana Journalist Association (GJA) Mr Affail Monney, said the book rightly drew the link between poverty and greed.

He said it had come at a perfect time when the nation was in a recession period and trying to fix issues of unemployment and poverty.

“I thank the author for this contribution to help address the societal issues and bridge the gap between the rich and the poor,” he said.