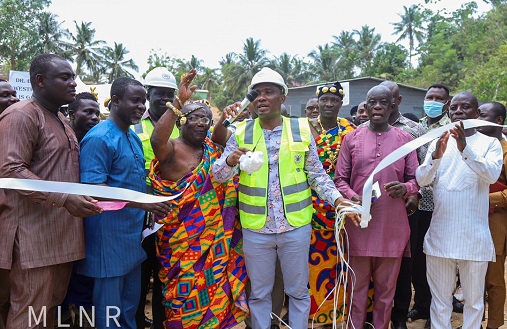 The Deputy Minister of Lands and Natural Resource in charge of Mines, George Mireku Duker, has inaugurated a community mining scheme at Akyemfo in the Aowin municipality in the Western-North Region, with a call on managers of the scheme to adhere strictly to the health and safety regulations at mining sites to prevent accidents.

Mr Duker also stressed the need for compliance with the standing operation procedures for CMS as outlined in the Minerals and Mining Regulations, 2012 (L. I. 2182) and the Small-Scale and Community Mining Manual to promote community participation in the small-scale mining space without compromising the quality of the environment.

Again, he said when the regulations governing the CMS was properly followed, it would promote responsible and sustainable mining while creating more jobs opportunities in mining communities.

At a ceremony held at Aowin today (March 18), the deputy minister, who is on a three-day tour of the Western and Western-North regions, also inaugurated the Aowin District Management Committee (DMC) to oversee small-scale mining activities in the area.

The Akyemfo CMS has a 25-acre concession.

It is expected to create 5000 direct jobs.

The Deputy Minister called on all concessionaires who wanted to cede part of their portfolios to support the CMS to approach the Lands ministry and Minerals Commission for discussion.

Mr Duker reminded the operators of the CMSs that the scheme had been reserved for only local people so under no circumstance must foreigners be allowed to participate in it.

He cited regulations 83 of Minerals and Mining Act, 2006, Act 703 to back the order for foreigners to be excluded from small-scale mining.

Making reference to Section Three of the Minerals and Mining (Amendment), Act, 2019, (Act 995), he stressed that any non-Ghanaians caught to have engaged in small-Scale mining would face imprisonment between 20 and 25 years and a whopping fine.

"Section Five of the above Act (995) forbids Ghanaians to aid non-foreigners to engage in small-scale mining. When caught, they will face imprisonment of between 15 and 25 years and or fines," he added.

In compliance with section 92 of Act 703, the minister inaugurate the Aowin DMC with a marching off order for them to work with other stakeholders to ensure that small-scale and the CMS in the municipality was undertaken in accordance with the law.

He called on the Western-North Regional Minister, Richard Ebbah Obeng;  the Aowin municioal assembly; traditional authorities and other opinion leaders to team up to support the scheme to succeed.

"As Chairman of Aowin Municipal Security Council (MUSEC) and the Aowin District Mining Committee (DMC), in line with section 92 of Act 703, you should act at all times to ensure sustainable mining in the district," he stressed.