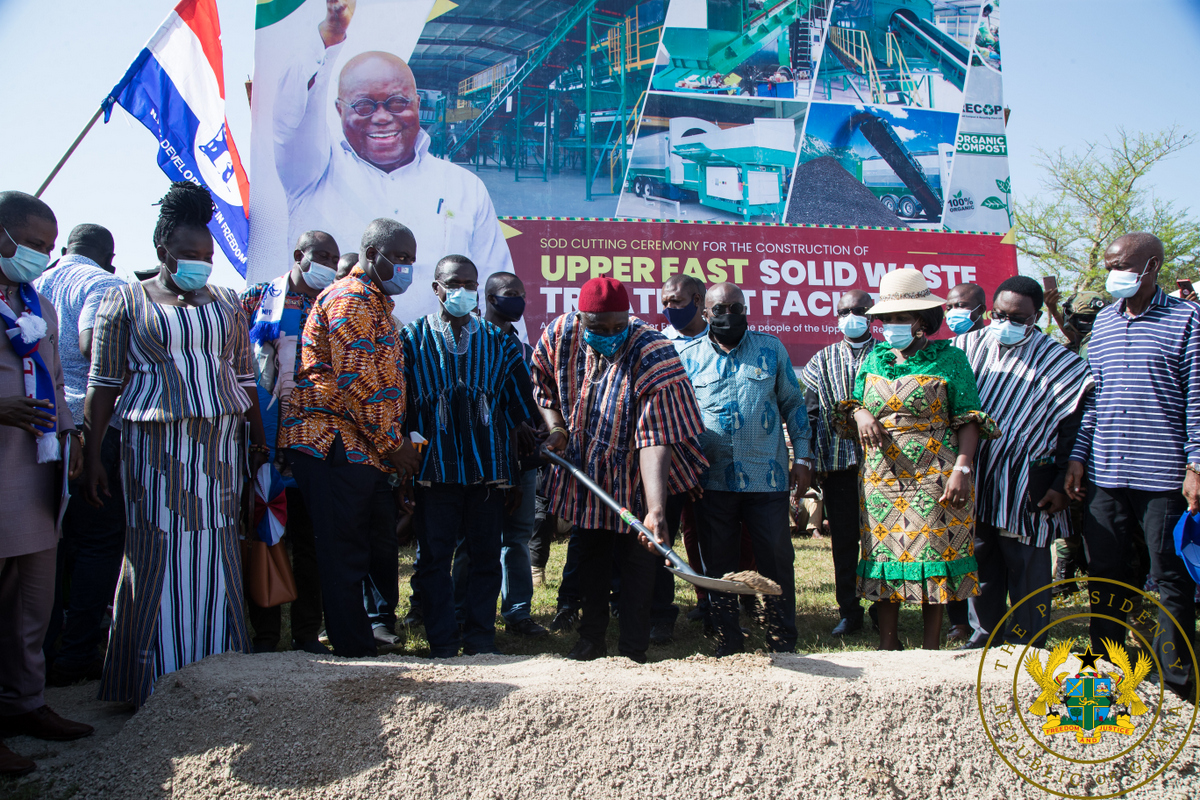 President Nana Addo Dankwa Akufo-Addo has reaffirmed his administration’s support for any private company which is ready to help in advancing the progress of the country.

“I want to reiterate that I am particularly keen to assist any private company which is ready to advance the progress of this country,” he affirmed.

The President made the pledge when he cut the sod for work to begin on the Upper East solid waste treatment facility at Sherigu in the Bolgatanga East District on Thursday (October 8, 2020).

The facility is a collaboration among Zoomlion Ghana Limited (ZGL) and its partners, Komptech, in partnership with the government of Ghana.

With the exception of the Kumasi and Accra composting and recycling plants which have been commissioned and were operational, works were on-going on similar facilities in regions including Ahafo, Bono, Bono East, Eastern, Western and Western North.

Thus, the Upper East plant brings the number of regions that have so far benefited from Zoomlion’s one region, one solid waste treatment facility to eight.

According to President Akufo-Addo, the waste treatment facilities across the regions were very important, adding that they will help deal with waste management in the country.

In this regard, he applauded the collaboration among the Jospong Group of Companies (JGC) and the ministry of sanitation and water resources (MSWR) for their efforts to ensure that all the 16 regions had a share of the plant.

He indicated that the compost recycling plants will help safeguard the sanctity of “our environment” and ensure that Ghanaians were always healthy.

The President went on to describe the Minister of Sanitation and Water Resources, Madam Cecilia Abena Dapaah, and the Executive Chairman of JGC, who is also the Chief Executive Officer (CEO) of ZGL, Mr Joseph Siaw Agyepong, as “two exceptional Ghanaians that we must continue to support.”

The event was part of the President’s two-day tour of the Upper East Region.

The Minister of Sanitation and Water Resources, Madam Cecilia Abena Dapaah, disclosed that the Upper East generates 782 tonnes of solid waste a day. She, therefore, explained that that would be a very good source of raw materials for the compost and recycling plant to be built in the region.

“There is the need for the private sector to fill in the value chain in the collection and transportation of solid waste in the region,” she said.

A clean environment, she said, will help promote tourism “which the Upper East” is noted for.

Madam Dapaah charged the assemblies in the region to collaborate effectively with Zoomlion to make sure the solid waste was properly collected and sent to the treatment plant.

The Executive Chairman of Jospong Group of Companies, Mr Joseph Siaw Agyepong, said, upon completion, the facility will offer 75 and 205 direct and indirect jobs respectively to the youth in the region.

He heaped praises upon the chief of Sherigu and the municipal chief executive (MCE) for Bolga East Municipal Assembly for making available a 100-acre land for the project
“…work is starting immediately the President cuts the sod, and the facility would be completed with four months,” he revealed.

At the end of his address, he showed a four-minute video of how the plant would operate in the management of solid waste.

The Chief of Sherigu Traditional Area, Naba Thomas Aluman Apasinaba II, on his part, expressed appreciation to the President for fulfilling all his campaign promises in the run-up to the 2016 election.

He said, social intervention programmes such as free SHS, Planting for Food and Jobs, NABCo among others have impacted positively in the lives of his people.

He used the opportunity to appeal to the President to intervene in ensuring that stalled state projects in his area including road networks were completed.

In a brief remark, the Upper East Regional Minister, Mrs Tangoba Abayage, stressed that her region had witnessed what she described as “monumental” development projects under the three-and-a-years administration of President Nana Akufo-Addo.

“There is no corner of the Upper East that has not witnessed any development under the Akufo-Addo administration,” she indicated.