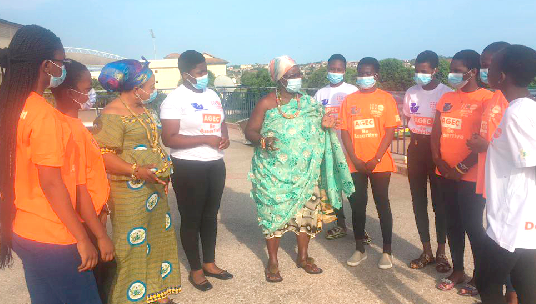 Nana Amba Eyiaba (middle), Krontihemaa of the Oguaa Traditional Area, and Ms Richlove Amamoo (third from left), Central Regional Director of the Department of Gender, interacting with some of the girls

Eighty adolescent girls have attended a mentorship and girls’ empowerment summit in the Central Region to build their confidence and to ward off sexual abusers.

It was also to encourage them to stay in school and work to achieve their aspirations.

The three-day summit was also to help develop the participants into assertive girls who will focus on school to attain their goals and aspirations.

The participants were taken through topics including sexual infections, sexual and gender-based violence as well as developing a savings culture.

The Central Regional Director of the Department of Gender, Mrs. Richlove Amamoo, in her remarks, advised the adolescent girls to be bold and to speak up against acts of sexual violence meted against them.

She said it was time for young girls to be politely assertive against men and boys, who perpetuated sexual violence against them.

Ms. Amamoo observed that data available indicated that adolescent pregnancy was very high in the region as a result of factors including cohabitation, parental neglect and poverty.

She indicated that adolescent pregnancy, child marriages and sexual and gender-based violence continued to plague many communities, particularly in the Central Region and urged them to report such perpetrators to the right authorities for action.

The Director of the Centre for Gender Advocacy and Documentation of the University Cape Coast, Dr. Mrs. Georgina Oduro, in her remarks, advised the girls to study hard and be well focused to achieve their goals and aspirations in life.

She said they should not only have aspirations and role models, but work hard to achieve such aspirations in life.

A Sexual Reproductive Health Rights Advocate, Mr. Michael Tagoe, for his part, urged the girls to adopt responsible sexual behaviours to prevent themselves from contracting sexually transmitted infections (STIs) by abstaining from sex.

He advised them to stay chaste in order to be free from those STIs so that they could live better and healthier lives.

The Krontihemaa of the Oguaa Traditional Area, Nana Amba Eyiaba, advised the girls to be assertive, determined and ambitious to attain their goals.