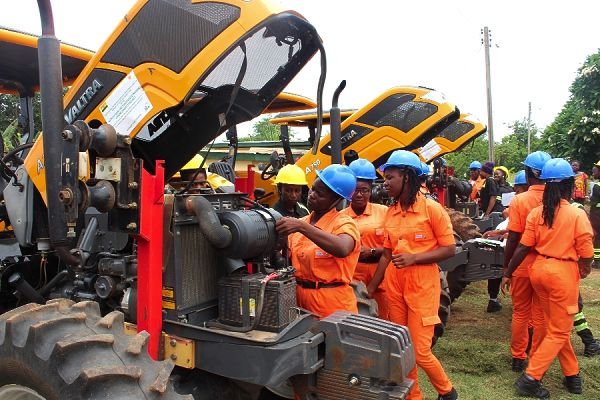 Some of the graduates displaying their skills in the servicing of tractors during the graduation ceremony
30.5k Shares

The Ministry of Food and Agriculture (MoFA), through the Agricultural Engineering Services Directorate and Women in Agriculture Development (WIAD), is to train 1,000 women in the management, maintenance and operation of tractors across the country.

The acting Director of WIAD, Ms Paulina Addy, who announced this at Wenchi in the Bono Region said the ministry had targeted to achieve this feat in collaboration with its partners to enable women to take their rightful place in the mechanised agriculture revolution in the country.

She was speaking at a passing out ceremony for the second batch of 60 women trained in the operation, maintenance and management of tractors at the Wenchi Farm Institute.

The training was done by the ministry, in collaboration with the Deutsche Gesellschaft für Internationale Zusammenarbeit (GIZ) and the African Union (AU), as part of measures to achieve the target to train the 1,000 women across the country in tractor management, maintenance and operation.

It is part of the Agricultural Technical and Vocational Education and Training (ATVET), which is one of the modules of the AU’s Comprehensive African Development Programme (CAADP) being financed by the German government.

The overall objective is to increase women’s employability and earning potential, particularly in the field of mechanised agriculture.

Dubbed “Women in the Driving Seat”, the passing out of the 60 trainees brings to 122 the total number of women who have so far been trained under the project, while 60 more are expected to be trained at the Adidome Farm Institute within the year.

Addressing the graduates, Ms Addy said it was important for women, who played important roles in the agricultural value chain in the country, to be equipped with the requisite knowledge and skills to enable them to play their roles as expected of them.

Speaking to the Daily Graphic, Mr Michael Boateng of the GIZ said the programme sought to develop women’s skills in managing agricultural machinery and equipment for enhanced agricultural productivity in the country.

He said women on the African continent played a vital role in agricultural activities since they formed about 80 per cent of the total workforce in the sector.

“In Ghana, women formed about 50 per cent of the workforce in the agriculture sector and there is, therefore, the need to put emphasis on women’s participation along the agricultural value chain,” he said, adding that the participation of women in tractor management, maintenance and operation was a key driver for enhanced agricultural productivity.

Mr Boateng pledged his organisation’s readiness to partner MoFA to achieve its target to train 1,000 women in the tractor operation to enable them to rub shoulders with their male counterparts in the agricultural mechanisation sector.

He said the ministry, in partnership with the Driver and Vehicle Licensing Authority (DVLA), had provided all graduates with driver’s licence “E” to enable them to operate tractors everywhere in the country.

For his part, the Deputy Director of the Agriculture Engineering Services of the MoFA, Mr Patrick Aboagye, said the patronage of the programme by women had been overwhelming and had, thus, provided the ministry with the hope that it could achieve its target of training more women in the management, maintenance and operation of tractors.

That, according to him, would enable women to move from the use of hoes and cutlasses to the use of mechanised tools and machinery to produce the various crops to boost their incomes.

The Chairman of the Agriculture Sub-Committee of the Wenchi Municipal Assembly, who is also the Chief of Koase, near Wenchi, Nana Owusu Ansah Sasraku Besseah II, who chaired the function appealed to the government to turn the Wenchi Farm Institute into an agriculture university where professionals in the sector could receive training.

He also called for the upgrade of the Women In the Driving Seat programme to enable the graduates to use their certificates as a basis for their academic progression anywhere in the country and beyond.