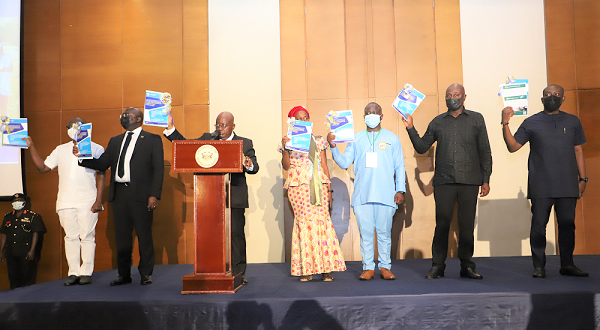 President Nana Addo Dankwa Akufo-Addo has called on all Ghanaians to offer unflinching support for the success of the 2021 Population and Housing Census, due in 29 days.

He also asked all those who will be in Ghana on the Census Night on June 27 to be ready to welcome census officials into their communities and places of residence, and provide complete and accurate information.

President Akufo-Addo made the call in Accra yesterday when he launched the “30 Days to Census Night”.

Field data collection will start with the listing of all structures from June 13 and the Census Night, set for June 27, this year, will see persons in transit and in short stay, institutions such as hospitals, guest houses and hospital in-patients being counted.

However, the enumeration of persons in households and long stay institutions would be counted from June 28 to June July 11, this year.

President Akufo-Addo noted that great efforts had been made to recruit census enumerators who lived in communities where they would work to ensure that the process took place in a safe and secure environment with no disruption to the daily activities of all residents in Ghana.

“Security personnel will be deployed to control continuously all areas to maintain law and order during the exercise,” he assured.

He paid glowing tribute to former Presidents John Agyekum Kufuor and John Dramani Mahama for their separate messages in support of the census exercise which indicated that the exercise was national and non-partisan.

“My government and Ghanaians fittingly thank them for their public service and for laying progressive foundations for evidence-driven decisions during their respective tenures of office,” President Akufo-Addo said.

The President, who was at the event with the Vice-President, Dr Mahamudu Bawumia, urged all political and religious leaders, the business community and civil society to use their various platforms to unequivocally support the census process for the sake of the country’s progress.

President Akufo-Addo said he was aware of several concerns and sensitivities about boundary disputes, religious and political polarisation but gave an assurance that the process would be independent and professional and that its outcomes would not be influenced by any of those factors.

Touching on the work of the members of the media, he appealed to practitioners in the traditional and social (new) media that “this is not the time to create controversy and confusion around an important national development exercise”.

The President explained that census data would save lives and livelihoods and encouraged all to do the right thing and support publicity, education and advocacy activities by conveying only reliable information and facilitating constructive discussions on issues around the census process.

“It is our civic duty to do all that is required to support this national development programme,” he stated.

President Akufo-Addo urged all those in the country on Census Night (June 27) to keep that in mind because they would be counted according to where they spent the census night in Ghana.

He emphasised that there was no need for anyone to change their location because census officials would visit all structures and places of residence and count all persons who would spend the Census Night in Ghana regardless of their status of residence.

President Akufo-Addo announced that this year’s exercise would be the country’s first fully digital census because it would involve the use of smart tablets and the use of the Internet to capture and transfer the information respectively.

That, he explained, would guarantee the delivery of high quality and faster results to support the decision-making process.

He added that the new system would use detailed geospatial information such as capturing the Geographic Positioning System (GPS) coordinates of all structures to improve resource targeting to areas that needed them the most.

President Akufo-Addo added that it would also use online dashboards and comprehensive data quality assurance procedures, including the use of real-time enumeration and data quality monitoring to ensure every structure and person was counted.

That, he added, would guarantee complete and accurate data to ensure that “we leave no one behind in sharing national resources”.

“Information will be collected in several new and important areas such as housing and living conditions, water and sanitation, and difficulty in performing activities of daily living; information that will further support the tracking of key national and global development goals,” President Akufo-Addo said.

He said in the spirit of leaving no one behind, the census would feature several new areas and focus on the disadvantaged members of society, such as persons with disabilities (PWDs), the orphan and vulnerable children, the elderly and even street families.

The Minister of Finance, Mr Ken Ofori-Atta, stated that with a budget of GH¢521.3 million for the exercise, the government had already disbursed GH¢467.2 million and would continue to ensure that funds were available for the successful implementation of the census.

He said the exercise should have taken place last year but was postponed due to the pandemic and that created a budget gap of GH¢54.5 million to cater for the procurement of personal protective equipment (PPE), among others.