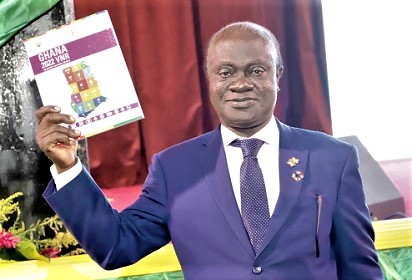 The Ghana 2022 Voluntary National Review (VNR) report on the Sustainable Development Goals (SDGs) has been launched in Accra.

It provides an insight into the progress made, challenges faced and lessons learned from the major SDGs and identifies catalytic and transformative priorities and the way forward to accelerate their achievement.

The report, which is the second VNR, was the result of a consultative and participatory process led by the National Development Planning Commission (NDPC) and involving ministries, departments and agencies (MDAs), civil society organisations (including representations of the youth, women, children and persons living with disabilities), the private sector, UN agencies and other development partners.

The first report was presented in 2019.

Ghana presented its second VNR at the 2022 United Nations High-Level Political Forum (HLPF) in New York in July this year.

In a speech read on his behalf by the Chairman of the NDPC, Prof. George Gyan-Baffour, at the launch, President Nana Addo Dankwa Akufo-Addo gave an assurance that in spite of the economic and geo-political challenges, the government would continue to take smart and bold decisions necessary to turn the current situation around.

That, he said, would also ensure that the country was on the right trajectory for inclusive sustainable development.

He noted that the government would also strengthen its relationship with international partners and traditional and religious leaders and build a safer, more resilient and prosperous society for current and future generations.

The President explained that the decision to conduct the second national review during these challenging times reflected the government’s commitment to attain the SDGs and, by extension, the principles underlying the African Agenda on 2063.

He noted that rising inflation, as a result of increasing food and fuel prices, triggered by post-COVID-19 complications and exacerbated by the Russian invasion of Ukraine, had put the world on the verge of recession.

That situation, he explained, would drive millions more into extreme poverty through hunger and malnutrition, all undermining the attainment of the SDGs.

He quoted the 2021 SDG report, which indicated that 124 million people had been ousted back to extreme poverty, the worst in a generation.

He, however, noted that such realities should not deflate current efforts; rather, people should be stronger and bolder in their resolve to achieve the SDGs.

President Akufo-Addo noted that there was a limited window of opportunity to curb poverty, promote inclusiveness and equality and safeguard the health of the planet.

He called for the deepening of strategic partnerships, bold and progressive coalition for the accelerated implementation of the SDGs.

“It is abundantly clear, at least to me, that if we are going to be successful in our endeavour, one of the key factors will be how smart and Innovative we are in mobilising financing and private investments to support the implementation of the goals,” he said.

He said with a financing gap of an average of $45 billion a year until 2030 to achieve all the SDGs, the private sector must see that as a business opportunity.

He noted that as a matter of necessity, the world should leverage fully science, technology and innovation to accelerate SDGs implementation because new technologies were rapidly transforming all aspects of society, the economy and the environment.

The UN Resident Coordinator in Ghana, Charles Abani, described Ghana’s report as one that was derived by participatory process.

He said the UN welcomed the government of Ghana’s strong commitment to the realisation of the SDGs, as demonstrated through the process so far and commended the leadership for the work done.

A youth advocate, Emilia Adjei, who represented the youth and children of the country, urged the government to, as a matter of urgency, rehabilitate all school buildings in deplorable states and leverage the insight and creativity of young people by including them in all decision-making bodies.

She called for the removal of taxes on sanitary pads to make the product available to and free for young girls, some of whom had to stay off classes during their menstrual period because they could not afford the pad.