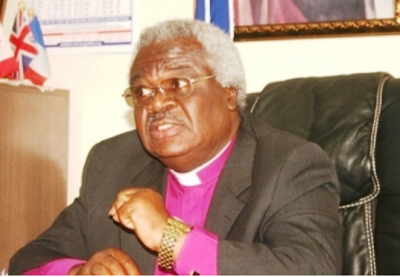 The Former Moderator of the Presbyterian Church of Ghana, Reverend Professor Emmanuel Martey has said Ghana needs politicians with integrity to lead the nation.

He bemoaned how, unlike other countries which punished their leaders for corruption, Ghana celebrated leaders who had caused financial losses to the state.

Rev. Professor Martey made the remarks as the special guest preacher during the homecoming service organised by the First Baptist Church, Tema Community Five.

The service formed part of the 50th anniversary celebration of the First Baptist Church.

The Former Moderator of the Presbyterian Church of Ghana charged politicians to display a high sense of moral integrity as they go about their daily activities in order to achieve greater heights in their line of duty.

He lamented how corruption had gained root in Ghanaian politics, saying “people go into politics for money. You see a fresh school leaver go into politics and when unfortunately he’s given a position, the first thing he does is to amass wealth.”

He said in countries such as South Korea where officials found to be corrupt were punished, Ghana celebrated leaders who had caused the nation lots of monetary losses.

“We shouldn’t be in this state. Go to South Korea. In the 50’s when we had our independence, South Korea also had her independence. ….the GDP is almost the same. The only difference between the two nations is that South Korea for the past two or three years, they have jailed two heads of states for money laundering and corruption but in Ghana, you rather hail the thieves and want them to come back again. This is serious!” he exclaimed.

Rev. Professor Martey congratulated the First Baptist Church and its leaders on their pioneering efforts and charged the current generation of members to go out into the world and make an impact.

“The sacrificial services rendered by the pioneers of this church should inspire us the present generation to sacrifice for the church and the nation,” he pointed out.

He advised church members and Ghanaians not to only look for what the church and the nation could do for them but also what they could do for their church and nation, observing that that was how God’s blessings came unto his people.

He said leadership played a key role and as a church, they owed it to their members and the nation to draw attention when things were not being done right. “Unfortunately in this part of our world, when you try to correct a government and draw attention, you are attacked and looked at in a certain way. That should not be the case. For any country to succeed, it depends so much on leadership,” he said