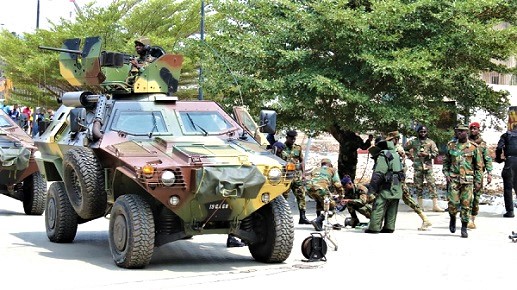 Navy personnel mobilising to rescue shoppers caught up in a detonation of explosives during the simulation exercise. Picture: DELLA RUSSEL OCLOO
30.5k Shares

It was in line with the navy's operational readiness to protect and prevent terror attacks within the country's maritime domain.

The exercise also sought to test and enhance the operational readiness of officers of the Special Boat Squadron (SBS) Unit of the Ghana Navy to conduct maritime interdiction operations to secure the country's maritime space.

The exercise featured personnel from the unit who staged an interception scene on a cargo container purported to be smuggling arms and ammunition within Ghanaian waters.

The team also demonstrated how to foil the trans-shipment of the arms and ammunition by feeder vessels that could be used by armed gangs in such operations.

The event was observed by the Chief of the Defence Staff, Vice-Admiral Seth Amoama; the Chief of Naval Staff, Rear Admiral Issah Adam Yakubu, and other high-ranking officials from the Eastern Naval Command and the Ghana Air Force.

Addressing journalists after the exercise, the Minister of Defence, Dominic Nitiwul, emphasised calls for the public to be security conscious and volunteer information to the security forces in the face of the difficulties associated with terror attacks facing the West African region.

He said the prevention of terror attacks on the country by the security agencies would be hugely influenced by the availability of information from the public.

Mr Nitiwul pointed out that while the leaders of West Africa were determined to rid the region of difficulties it continued to face as a result of insurgencies, the menace could only be curbed if citizens became willing partners in the scheme.

"Please join government to fight the menace since you can never know who a terrorist is if you fail to report suspicious activities within your communities," Mr Nitiwul appealed.

Ghana, Mr Nitiwul indicated, was an import-dependent nation, and that it would be important to safeguard the security of the country.

He commended the three arms of the Ghana Armed Forces for initiating the exercises at all levels to enhance the country's security, and gave an assurance that the government would ensure that the forces were adequately resourced to ensure that Ghana remained a peaceful nation within the sub-region.

The Defence Minister also warned members of the public to be cautious of threats to avoid rushing to take photographs of suspected explosions just to share on social media.

"When there is an explosion like what we just witnessed with the simulation exercise, the best thing to do is to move away from the scene as the first option so you do not endanger your life.

“The death toll we saw in the mining town of Appiatse when a vehicle carrying explosives caught fire was as a result of people rushing to take photos and videos.

“If we are all aware of the dangers of any form of explosions and take the precautionary measures, we can protect precious lives," Mr Nitiwul said.