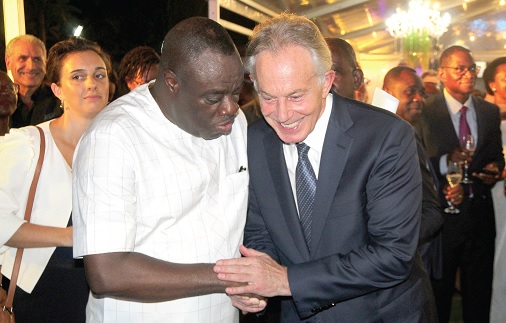 A former Prime Minister of the United Kingdom (UK), Tony Blair, has described Ghana as a country with a bright future and the potential to become one of the greatest countries in the world.

“The other thing I want to say is that this relationship between Britain and Ghana is one we are proud of and want to deepen. We believe in this country; we believe in its future; we believe in the people and we know that Ghana is not only going to be one of the greatest African countries but the world in the future,” he added.

Mr Blair, who was on a working visit to the country, was speaking at a party held at the British High Commissioner’s residence in Accra last Tuesday to mark the 96th birthday of Her Majesty Queen Elizabeth II.

The event was attended by a host of dignitaries, including members of the Diplomatic Corps, traditional and religious leaders, chief executives, Members of Parliament (MPs) and Ministers of State.

On display was the latest Land Rover vehicle and an e-motorbike.

Queen Elizabeth has travelled more than any monarch in the world — 271 official visits, including two of such visits to Ghana in 1961 and 1999.

Mr Blair, who was Prime Minister of the UK from 1997 to 2007, said Britain would increase its presence in the country.

“I love Ghana; it is a great country. I love the culture; I love the people; I love the energy of the place; and what is amazing is that everywhere you go in the world, you meet Ghanaians,” he said, adding that Ghanaians were smart and intelligent people who were full of optimism and hope.

He explained how he first met Queen Elizabeth after the general election in Britain in 1997 when he had to go through the “Kissing hands” ceremony, a British tradition for new PMs.

The British High Commissioner to Ghana, Harriet Thompson, also said the strong partnership between her country and Ghana had led to strides in the fields of health, investment, job creation, security, education, among others, adding: “We would not have been able to do it without you.”

She said having been in Ghana for the past eight months, she had come to love the culture, music, natural beauty and history of Ghana.

Ms Thompson said she would work to deepen the relationship between the two countries for mutual benefit.

The Minister of Tourism, Arts and Culture, Dr Mohammed Ibrahim Awal, said the event was significant, not because of the lifting of the COVID-19 restrictions but also the fact that the Queen was celebrating her 70th anniversary on the throne, the first British monarch to reach such a milestone.

“We in Ghana happily recall two moments in her reign when she visited the country in November 1961 and November 1999 and their impact on Ghana’s political landscape, as well as the Commonwealth, which has been transformed,” he said.

Dr Awal said the relationship between Ghana and the UK dated back to 1867 when the then Gold Coast became a British Colony, adding that since March 1957, the relationship had been anchored on history, bilateral cooperation, as well as multilateral agreements.

“Our bilateral relations have also been characterised by high-level visits, during which issues of mutual interest have been discussed,” he said, adding: “Ghana cherishes its relationship with the UK and welcomes the efforts the two countries are making to deepen cooperation in various fields, including health, education, trade, security and defence.”