Ghana-Germany partner to address needs of migrants, others 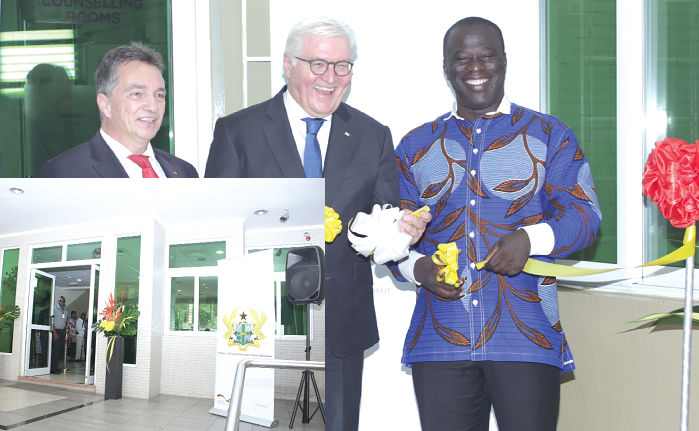 Ghana and Germany have committed to stemming irregular migration to Germany and other parts of Europe, by opening a centre to cater for the needs of returnee migrants and prospective ones.

Christened the Ghanaian-German Centre for Jobs, Migration and Reintegration, the facility, among other things, is expected to support returnees with regard to their social and occupation reintegration.

The centre will also provide information and advice on vocational training and employment opportunities in Ghana, as well as information on options and requirements for legal migration to Germany.

As the centre positions itself to be the first point of contact for people looking for prospects in Ghana, it is expected to offer support to Ghanaians resident in the country and returnees who need reintegration and counselling on job and educational prospects, training unit for job interviews, application documentation and advise on entrepreneurship.

Mr Baffour-Awuah said the facility would be a centre of excellence and would take the co-operation between the two countries to a higher level.

“It will be a centre for Ghanaians who have travelled abroad and will want to come home and seek advice on how best they can take advantage of opportunities locally,” he said.

He cited Prof. Kwabena Frimpong-Boateng as one of the many Ghanaian returnees who had paid their dues to national development by the establishment of the Cardiothoracic Centre, which the minister described as one of the best on the continent.

Mr Baffour-Awuah acknowledged that the country’s economic situation over the years had compelled some of its young people to risk their lives on the journey to Europe through tortuous and perilous travelling through the desert and the Mediterranean with undesirable consequences, including death and inhuman treatment.

Records on Ghanaians embarking on the journey to Libya and subsequently to Europe are hard to come by, but according to the International Organisation for Migration (IOM), as of September this year, 135,937 migrants and refugees entered Europe by sea with 4,439 migrant fatalities.

The employment minister, however, said President Nana Addo Dankwa Akufo-Addo was determined to change the trend in the case of Ghanaians, through policies and programmes to create jobs that provide living incomes.

“In the interim, this centre will offer the opportunity to those who would want to do proper migration to Europe, particularly Germany, because we will still want you to train some of our Prof. Boatengs and the likes.

“We know that when it comes to expertise in the technical field, technical and vocational education training, inventing, renewable energy, you are one of the best. We would continue to tap that knowledge until we can build our own capacity,” he said.

Mr Baffour-Awuah said his ministry was committed to its part of the agreement to make Ghanaians interested in their country and to stay and work in it.

Dr Kitschelt, for his part, said the centre was opened to support Ghanaians resident in the country, as well as those who would voluntarily return to Ghana.

He said Germany had over the years invested more than two billion euros as its contribution to building a sustainable economic future for Ghana, which had created broad-based opportunities for Ghanaians abroad and residents.

“The centre will provide information to the returnees to better integrate into the labour market, as well as assist them with start-ups that will create decent future for Ghanaians. Nobody returning to Ghana, will return to Ghana as a loser,” he said.

The German delegation later met some Ghanaian returnees from Libya and a returnee from Germany, who shared their tales of horror in a bid to enter Europe through Libya.

In the recent past, Germany, through the Centre for International Migration and Development’s Returning Experts Programme, supported the integration of university graduates and experienced experts from developing, emerging and transition countries, who had completed their training in Germany and were interested in returning to their countries of origin.

The focus is on placing professionals in areas of particular relevance to development policy. In addition to placement and advisory services, the programme offers financial support to experts interested in returning to their own countries. Employers also benefit from programmes or services such as assistance with recruiting employees.